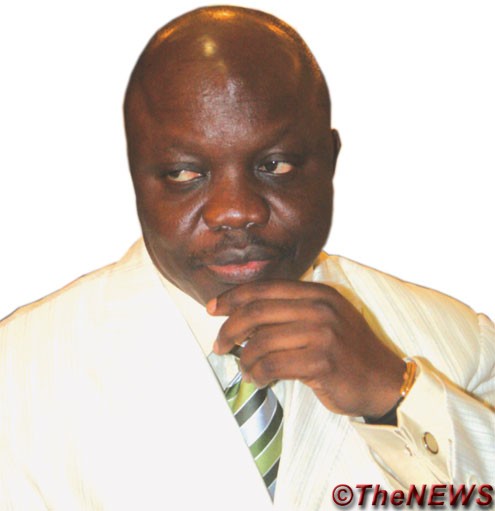 Forgive me for not putting your address in this letter. I am sorry. I have the addresses of all your houses in Nigeria and abroad (including the ones you bought using fronts), but for lack of knowledge on your current abode, I left the address open. My apologies Sir.

I saw your rebuttal through your media aide, Sunday Areh, where instead of coming out plain to just deny it, you resulted to calling me unfounded names that only exist in your imagination and that of Areh. As usual, I laughed it off knowing you to be a man that has no truth in him. I still remember vividly well in 2014 when I exclusively reported that you had plans to contest for the Senate after your tenure but you denied it, only to indicate interest later. I have lost count of all the words you never kept to, hence was not surprised that you claim not to own the mansion.

Permit me to set the records straight. No one has ever used me or the platform I work for to investigate and report against you and no one will ever do so. It is only in your world of existence that I have ‘sponsors’, using me to discredit you. As a journalist and a young one that God has given a name, I have a mind of my own to report what is hidden for the good of the public. I’m not unaware of your acts of recruiting some internet rats to post irrelevant things about me, but you do know that a million of them cannot stand up to the truth which I represent and will be unveiled till you are prosecuted.

You used the word ‘blackmail’ in your response for reasons only you know. But again, let me educate you Sir. NEVER in the past or present have I ever asked you for any money to kill a report and if this is a lie, be proud to tell the world personally or proxies that I Fejiro Oliver of Secret Reporters News demanded from you in cash or kind to let a story go. You can still tell the world if I have ever approached you with many mindblowing documents at my disposal to show you for any financial gratifications. You can still also print out our few SMS exchanges for the people to read it and be draw a conclusion if I asked you for cash in exchange of stories. This is not peculiar to you alone but any person living or dead. Your colleague in Niger State, Babangida Aliyu tried it by framing me up with such but it backfired and I did not only walk out a hero, but went to court to get justice and WON!

I do not deny the fact that our relationship resulted in my Sister In-law going to the prestigious Access Bank training school and finally got a job with them. For that, I owe you a debt. But such cannot erase away new revelations on the table that Deltans and Nigerians need to know. Such cannot take away the patriotism in me when documents I never saw in years past but now see stop me from opening up how you bled the state to coma under your watch. Your Excellency, you drained Delta State without mercy.

I can proudly beat my chest Sir that I have choice lands in some States, not acquired with stolen money but from the job I do as a media consultant. I can stand head tall before any anti corruption agencies that the cars I drive and properties I developed and still developing were acquired not through ‘blackmail’, government contracts or brown envelopes but through credible means with the company paying tax on them. Can same be said of you?

I do not need to remind you Your Excellency that you came into government in a kabu kabu with the smoke coming out capable of taking one’s life. Your work as a Medical Doctor was not paying much while married to Anty Roli, whom we knew back then in Sido Street, Warri, but today; you are not just a millionaire but a billionaire. You can pretend to those who don’t know your financial worth, but not to persons like me who has spent his resources to get facts and documents detailing how every single kobo that came into the state treasury under your watch was spent and disappeared.

Unlike most of us who struggled and still struggling to make it to the top, you had your palm kernel cracked for you by the gods, with the help of your cousin, James Ibori. Your hatred for people getting rich is becoming legendary from your interactions with person and your tricks in splitting persons perceived as combating you jointly is well known. Unfortunately, men like me are not bothered by such antics.

I had all the chance in the world to swim in excess wealth in 2014/2015 when you were still a governor, like most of my colleagues that you lavished with state funds. I am pretty sure by now that you will be regretting why you built a sprawling mansion for a reporter in Asaba only for him to turn round to report negative news against you when you left office. I do not need to mention journalists that you squandered our state money on just to remain in their good books. You know within you that I refused to be bought over despite every attempt. I had a personal mission, which was to let Deltans know how you were bleeding the state and must not allow you impose a stooge on us or support your Senatorial ambition. The mission was fulfilled!

My advice to you is simple; return back part of the money you stole from Delta State treasury. Cause Her Excellency, Roli to return back Mastercare School that was built with proceeds of corruption just like Fmr Gov. Godwill Akpabio returned his to the State Government. Delta State is facing recession because a man like you was unfortunate to be our governor. With all the money that flooded the state, you refused to create industries or turn Asaba into a model city, an assignment that is standing as a negative witness to your successor today.

Your Healthcare program, model schools and security cannot be taken away from you, but governance is more than the trio. Without a strong financial base, the three programs cannot stand and unfortunately, you left the state financially empty, as far as removing the common coke in government house fridge, thus killing your three agenda that should have been sustained.

2017 begins the election year for 2019 and Deltans cannot afford to have you in the Senate as you currently dream. Your Senatorial District electorates have not complained that they are tired of the present man there and even if they are tired; you are certainly not the best to represent them. The political ‘immunity’ you seek by going there cannot be granted you.

Deltans need back their money Sir and we will do everything within us to return it back. The case of Ibori will be child’s play compare to what is to come upon you. The cross has been carved since 2016 and in 2017, the nailing will take place. You cannot toil with our future and expect to go scot free. You cannot be living in Victoria Island and enjoying the cool breeze of the seaside while Deltans still feel the pains of your mis-governance. No Sir, you cannot have investment in South Africa with our money, while the youths who should be the ones working there had they be sited in Delta be roaming the streets looking for jobs. Sir, you cannot be flying first class to London, USA, Switzerland (where some of our wealth are kept by you), while the Oleri leisure park through which you siphoned money remains undone.

Kurt Cobain once said that “The duty of youth is to challenge corruption”. The files will be opened and the records will be dusted. The time is close and we will March there.