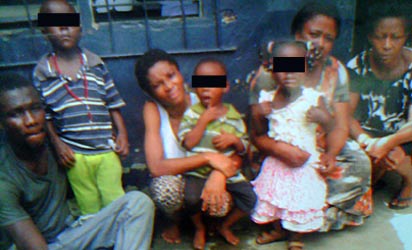 With over 20 kids abducted in three months in Calabar, the stories surrounding their disappearance are like tales from the moon, but what is happening to kids between the ages of three and six in the Cross River State capital, is far from tales; they are real life incidents which are sending fear down the spine of many parents.
Since February,  men from hell have besieged the city, snatching children suspected for ritual purposes or sale to barren women around the city who  allegedly pay triple digit amounts for the kids.

The Cross River State House of Assembly and the State Security Adviser, Mr Rekpene Bassey, disturbed by the  trend, raised the alarm but this has not yielded any results. The police in the state are yet to make arrest on the kidnapped children.

Describing the modus operandi of the abductors, Bassey said they would  position themselves in busy areas to watch out for parents who park cars with children inside to abduct the kids. In other cases, the thieves abduct children playing outside their residences. Others are snatched while on errand or on the way to or from school. And in some daring cases , the abductors snatch kids from parents while pretending to offer them lift. The security adviser warned parents to beware of  child kidnappers and assured that security agencies had been placed on the alert  over the situation.

In one of the cases of child kidnapping which occurred on March 23, a four-year-old, Nsew Udo Akpan, was snatched by abductors while playing outside his home with his sister at Atekong Street, Biq Qua Town.
Another  4-year-old-boy, Effiong Edet, was abducted in Ikot Onim  area of Calabar by hoodlums who raided the community in an Audi car with the  number plate covered.

The kidnappers struck at about 8:30 pm on Wednesday March 12 while the local vigilante members, majority of whom are  said to be football lovers, were preoccupied with watching the Arsenal match against  a Turkish football club in the European league.

The gang , on arrival at the community, reportedly drove to the Edets compound where they sighted the boy (Effiong) and his friends playing.

The hoodlums first attempted to whisk away a six-year old boy, identified as Joseph, who resisted his assailants by crying and biting one of the kidnappers on the hand which caused them to abandon him and then seizing   Effiong  who they bundled into their car and sped off.

In February, a three-year, old-boy, Victor Offiong-Edem, was taken away by  unknown persons at the Assemblies of God Church, located at  14, Nnamdi Azikiwe Street, Calabar South, during Sunday service.

The father of the boy, Mr Offiong Edem, a staff of the College of Health Technology, Calabar, told Sunday Vanguard that he took his family to the church on the fateful day. After the offering, he went to work and left Victor in the company of his wife, Angelica, and his other son, Samuel, but was later informed that Victor had gone missing.

“I work on Sundays. After giving my offering that day, I went to work leaving behind my wife, Angelica, Samuel, my first son, and Victor in the church only to be called later that Victor had gone missing ”, Edem stated.

Mrs Angelica Offiong, mother of the missing boy, said after the close of service, she had a short meeting with some church members. “After the meeting, I  went to pick my bag where I kept it not far away from where I stood and, when I turned back, Victor was nowhere to be found”, she narrated, tears rolling down her cheeks.

The kidnapper, according to her, must have been monitoring her and the children and as soon as her eyes were turned away from the child, he took away the boy.

Pastor Chukwu Ekeke, the head pastor of the Assemblies of God Church, said this was the “first time an unfortunate incident like this would take place in this church”. He added, “Prayers have been said and I know God will certainly bring back that boy”.

In January, two siblings, Goodluck Charles Eyo and Promise Charles Eyo, were playing in front of their residence, located at 98 Eserebom Street, Calabar South, while the mother, Uduak Charles, went to the back of the house to take   her  bath. When she stepped out of the bathroom, the two kids were gone. Their father, Charles Eyo, a Keke Napep rider, said he had done “everything spiritual and physical to get the children back to no avail”.

Also in January, a mother, Janet Ekpe, was walking along Bakoko Road, at 8 Miles, Calabar, when two men in a car stopped by; she thought they wanted to find out how to locate a place. “One of them was in the car while the other came out. I thought he wanted to ask me the number of a street but, before I knew it, he snatched Junior out of my hand, ran into the car and they sped off”.

The lady, who said she was stunned to know what was happening, said she came to her senses after the car had gone far. By the time she started screaming, the thieves had disappeared.

A member of Cross River State House of Assembly, Ngim Okpo, brought a motion of urgent public interest “on the increasing incidents of child snatching where, in recent time which have seen cases of kidnapping of innocent children by some unscrupulous elements for alleged ritual purposes”, before the House.

He called on the House to pass a resolution to compel “relevant government agencies to sensitize members of the public against falling prey”.

The police, on their part, said efforts were on to unravel the syndicates behind the stealing of children in Cross River State. Mr Hogan Bassey, the spokesman for Cross River Police Command, told Sunday Vanguard: “Police cannot be every where; members of the public should volunteer information on those they suspect to be the brain behind  abduction in the state”.