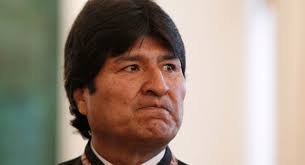 NewsRescue– After his presidential jet was blocked from flying through Europe, on Washington’s orders, based on “suspicion that Edward Snowden was on-board,” together with the rest South American leaders, the president of Bolivia had the following to say about America:

CNN: “Message to the Americans: The empire and its servants will never be able to intimidate or scare us,” Morales told supporters at El Alto International Airport outside La Paz late Wednesday. “European countries need to liberate themselves from the imperialism of the Americans.”

Speaking alongside Ecuadorian President Rafael Correa and Venezuelan President Nicolas Maduro at a rally in a packed stadium in Bolivia Thursday evening, Morales said officials should analyze whether to shut down the U.S. embassy in his country.

The president, who expelled the U.S. ambassador in 2008, said he wouldn’t hesitate to boot the embassy, too.

“Without the United States,” he said, “we are better politically and democratically.”

In several speeches Thursday, Morales said he had been targeted for his indigenous background.

“What happened during these days is not a coincidence, not a mistake like some governments say,” Morales said. “It is part of a policy to continue intimidating the Bolivian people and Latin America.”

He added, “Our sin is being indigenous and anti-imperialist.”