NewsRescue– Latest indications are that one of the Woolwich attackers, who may have survived according to tweets, is a Nigerian, of the Yoruba ethnic group, Michael Adeboloja, Muslim name, – Mujahid. He allegedly reverted to Islam in 2003. Though he is a British citizen.

The attacker is seen talking to an onlooker who recorded the scene, saying the following:

“I apologize that women had to witness this today, but in our land, women have to see the same. You people will never be safe,  REMOVE YOUR GOVERNMENT, they don’t care about you.”

Tweets from an associate of his, who declined more media interviews out of fatigue with the incident, a certain Abu Nusaybah, revealed more details about the incident: 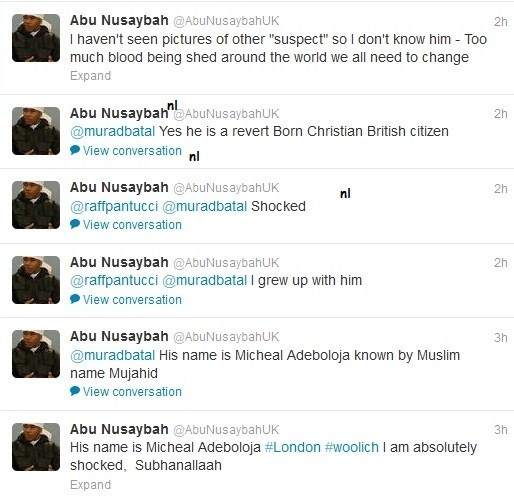 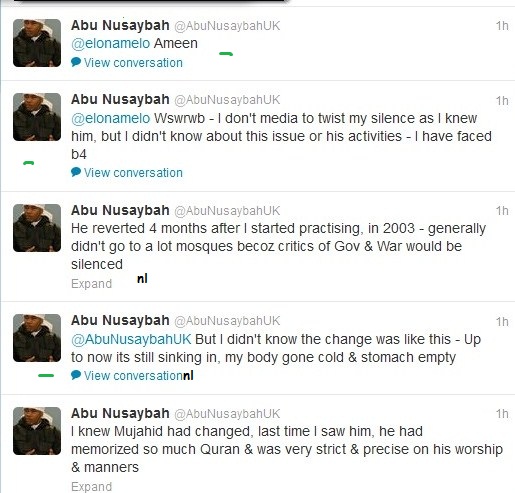 One reportedly British veteran soldier was hacked to death in the attack after being run into by the two young men. Nigeria is currently victim of radical terrorism under the guise of a Boko Haram sect, which receives training and arms from the nations northern and eastern neighbors. Arms flow from Libya’s arsenal and the terrorist group has connections to AQIM, the north African affiliate of al-Qaeda.

The government has recently waged a full scale war to crush this radical sect.

A war of two, not typical terrorism

From the image below, it is clear that the boys planned their mode of war very carefully. One guy is seen in this picture talking to a scout who confronts them and tells them they will loose by numbers, ‘we are more than you two guys.” He holds the knife in his left hand and engages her in conversation with no intention to attack. The same thing happened when the other attacker spoke to the camera. They did not attack civilians. In typical civilian terrorism, civilians are attacked and the aim is the largest number of causalities to invoke the greatest terror. According to the reports, they lurched after the accosting officers who killed them. This was a Military strike, aimed at the service men of the UK, not a random, regular terror attack.

Update, 7pm GMT- Sources close to the family allege that Micheal Adebolajo was well known to domestic and international intelligence agencies. He was on the MI5 watch list. He recently traveled to Kenya and went missing before intelligence reportedly went to fish him out. The sources also describe a recent history of violence including appartment thrashing and stabbing the past year. These intelligence misses are similar to those made by the FBI in the US Boston bombing case where, there is enough information to possibly warn and protect the public but law enforcement hsitates.