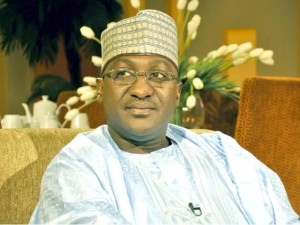 If outgoing President Goodluck Jonathan genuinely thinks he is acting in national interest by the gale of sacks in the twilight of his administration then he has apparently made an omission that must be remedied immediately as there is still one entity that must leave office with the administration. Cue the Director General of the National Orientation Agency (NOA), Mike Omeri.
A sack at this time for Omeri would not just be part of the gale of sacks by a President Jonathan, smarting from the bile of defeat, it would be a man making good with history and the people since he should not have appointed Omeri to such strategically symbolic position in the first place. One need not rewind the tapes of history for too long to recall that Omeri was fired by this same President Jonathan as the Director of Research and Strategy of his campaign in 2011. The NOA boss’ offence at that time? He lacked decorum, etiquette, and was boldly rude to other presidential candidates.

It turned out that what was described as ‘bold rudeness’ at that time was more or less an innuendo for hate speech. The alarming barrage of hate speech that thus characterized this year’s general elections had their root cause somewhere. The preponderance of hate speech could be traced to the fact that a purveyor of such act was rewarded with a greater assignment of molding national thought at the NOA. Little wonder many members of campaign teams tried to outdo themselves in terms of who can churn out the most repugnant utterances: perchance they would be suitable replacements for the 2011 beneficiary.

NOA by its raison d’être is meant to function beyond being the sloganeering machine and conduit pipe for laundering public funds. It is an organization that should shape the thought pattern of Nigerians while creating a prism through which the world perceives Nigeria and Nigerians. This was never the case for the length of time one minute for the entire duration of Omeri’s leadership of the agency.
His membership of President Jonathan’s Presidential Campaign Council is an enduring proof of where Omeri’s service was loyal to. An NOA DG being part of the Council was in violation of Part 2 Section 6 (2) of the National Orientation Agency Act which clearly prescribes that the Director General of NOA should be non-partisan. With his appointment into the Council, Omeri was always a party stooge first before considering himself as being accountable to Nigeria and Nigerians in accordance with the oath of office he took.  The natural reaction is for paid minions to dismiss this write up on the basis that the constitution guarantees freedom of association, including the right to belong to a political party. Proponents of this line of argument must however realize that the incumbent NOA DG’s position in this matter is untenable for the right reasons.
First, he has a history of being a purveyor of hate speech, scarcely the appropriate credentials for someone whose core responsibility include steering the mass of the population from such destructive tendency. Secondly, he is exceptionally partisan, which made him accepted to serve on the Presidential Campaign Council as one of the leading candidates so his loyalty was never for the job nor for the country; his loyalty, dictated by years of ingrained habits was for his paymaster and anyone not favourably disposed to this was like an enemy.
It will be mischievous to say these factors did not matter in any way. Here was a man who exploited the latched-on position of the National Information Centre for scare mongering when he rushed to the media with allegations of planned attacks on election venues by terrorists disguised as women, which a political party dismissed “as opposition stronghold depopulation strategy”.
Omeri’s conduct and antecedents thus gave impetus to others to toy with hate speech during electioneering campaign. If he acted to stem the tide, it was either such attempt was half-hearted or it was not meant to succeed. In a country with an agency like NOA hate speech flourished while the man who should mold national thought against it was hopping atop soap boxes, climbing podiums and dancing to war songs being chanted by his party when the country almost imploded.
Thankfully Nigeria survived as citizens indicated their desire for a different direction and a new way of doing things. If things must be done differently, a man who has not shown capacity has no business leading a subset of the charge. If President Jonathan would not do Nigerians the favour of booting Omeri out of the way, then the NOA DG should be gentlemanly enough to show himself the way. Where neither of these happens, then the incoming administration must be serious with what they have promised Nigerians by making sure that an institution like NOA, which seeks behavioral improvement among the populace, is not burdened for one day longer with an undesirable leadership.
The next administration must then shop for a person with broad based experience with local and international connections, who has the capacity to independently generate ideas, funds and activities to give Nigerians a repackaged NOA. Borrowing from what a revered elder once said, the position of NOA DG should not be for ‘errand boys.’
Ogbeh wrote in from Minna, Niger State.