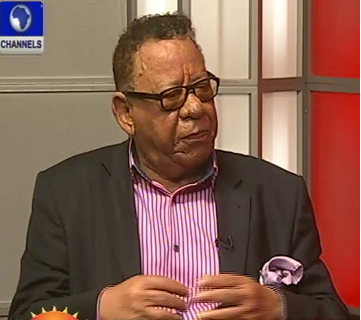 In a Sunrise Daily panel discussion on Channels TV Wednesday, Robert Clarke, SAN defended the current relegation of the Nigerian army to crime response and maintaining law and order within the nation.

The elderly attorney was on the show as a follow-up interview to a brutal delivery by fiery SAN attorney and human right activist Femi Falana.

Falana had delivered an earth quaking condemnation of the processes violations in Nigeria, citing the role of the Nigerian army only in defending the territorial integrity of the nation and acting only as an assistant to the police and not usurping the duties of the police in violation of section 217 of the constitution, as now obtains. Falana had decried the militarization of Nigeria and implicated this role highjack in the frequent grave headline human right violations by a military that does not know urban policing, highlighting examples like the murder and  secret burial of 347 Nigerians in Zaria last December.

Hopefully most Nigerian readers are smart enough to see where a whole dignified SAN attorney of Nigeria got things totally wrong by accident or attempted to obfuscate.

Section 218 sub section 3 only defines that the President of Nigeria can relegate his control of the army to the army. It does not say that he can or the army can transgress the duties and role of the army or usurp the duties of civil authorities.

The President can “delegate to any member of the armed forces of the Federation his powers relating to the operational use of the Armed forces.” He can as he chooses even give a captain the control of the army. meaning, he rescinds his control and puts that captain in charge. He (the President and primary driver) can choose a substitute driver to drive his car…but this does not mean the driver can now drive the car as he wishes and use it to ram pedestrians.

During the interview, Robert Clarke attempted to justify the extrajudicial use of the army by referring to Nigerians accepting its engagement in restoring order to the northeast. What the attorney was unaware of (or concealed) was the fact that a state of Martial law must be declared for such to happen and was declared specifically in the northeast with the National Assembly under Jonathan approving the dispatch of the army to Borno and neighbouring states.

The army otherwise cannot step ahead of the police (civil authorities) to institute law and order or supress insurrection within the territory of Nigeria. It can only work as 217, 2, c clearly states, to “aid” civil authorities on request of the President “but” subject to the approval of a defined “Act of the National Assembly.”

Where is the Act of the National Assembly in the dispatch of the army against cattle rearers, herdsmen, political thugs, protesters, kidnappers and the rest?

It is very important in a modern democracy to clearly delineate these factors that prevent the militarization of the state and potentially lead to coups.

The army is not trained in instilling or maintaining law and order. They do not have handcuffs as part of their regalia, do not have water canisters, pepper spray, water tanks, clubs and other equipment for dispelling riots. They are trained to fight armed enemy combatants and not for urban crime and riot control, talkless traffic stops and polling booth and petrol station duties. This is why they continue to beat and kill innocent Nigerians.

Robert Clarke claimed that Nigeria’s police do not have the type of guns to fight the type of gang crimes that abound. Even the stick and stone wielding Civilian-JTF fought the worst of them, Boko Haram, talkless the Nigerian police. It is unfortunate an attorney does not know the training and role of the Police “force.” He remarked that the police do not have the right weapons. On the contrary, Nigerian routine Police have weapons for armed battle confrontations. They sling AK47s on their shoulders as compares to New York PD that travels with pistols and only keeps submachine guns in their car trunks.

When battle-worn soldiers, psychologically traumatized from Sambisa forest are put on the streets, the outcome can be predicted. Massacres as obtained in Aba and Zaria and then secret burials and desperate denials by an army that has been misused, abused and thus undermined and put in further jeopardy.

As attorney Falana, SAN said, by now the Buhari administration should have embarked on an urgent recruitment of at least 500,000 police men. The Police department must be strengthened to conduct their duties rather than the army usurping the role. Of only 350,000 Police, 160,000 protect the big men and politicians with less than 200,000 left to police the entire 170 million Nigerians. This is a violation of the right to security and life. An additional violation by dispatching the army to do the work of police only doubles the violations rather than addresses the primary violation.It must be mentioned that no infrastructure by the new government is as important as the protection of that primary right: the right to life.

The army granting an amnesty, ala “Safe corridor” for rehabilitation, training and reintegration into society is another such dangerous action by the Armed forces that has usurped not only the role of the police but also of the legislature and judiciary. The army has no constitutional right to pardon or offer a pardon to any criminal or terrorist. the constitution and anti-terror bills have clearly designated the authorities in charge starting from the AGF and the punishment for terror: death. Only a new amendment subject to constitutional approval can spare the lives of terrorists who have raped and killed. But the Armed forces does not understand this and under the quasi-military rule with the army assuming powers of the three arms of government, they have granted an amnesty(pardon) of their feeling.

Robert Clarke claimed that desperate times call for the violation of the constitution. This is utterly false. The result of poor policing and the ready militarization has been oppression with the creation of societal upheaval, disgruntlement and terror as a consequence and not the other way round.

What was most sad from the interview was to see that an entire SAN of Nigeria does not understand the law, is unable to interpret the basic law, does not understand what a democracy is and advocates the violation of the law. I will not query what acute or chronic events could have made him put up such a show.