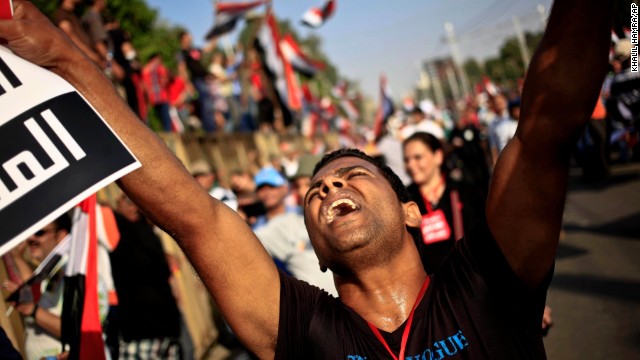 “The president is no longer able to make any political decisions now and a decision has been taken to prevent leaders loyal to the current regime from traveling overseas until the General Command of the Armed Forces are finished formulating their expected statement,” it added.

The announcement came less than two hours after the nation’s first democratically elected president offered to form an interim coalition government and as one of his aides and a Muslim Brotherhood spokesman said it appeared that a military coup was under way.

An aide to Morsy, Essam El Haddad, said in a Facebook posting that a coup was under way.

“For the sake of Egypt and for historical accuracy, let’s call what is happening by its real name: military coup,” said El Haddad, who works in the office of the assistant to the president on foreign relations.

“Today, only one thing matters. In this day and age, no military coup can succeed in the face of sizable popular force without considerable bloodshed. Who among you is ready to shoulder that blame?”

He added, “In a democracy, there are simple consequences for the situation we see in Egypt: The president loses the next election or his party gets penalized in the upcoming parliamentary elections. Anything else is mob rule.”

And a Muslim Brotherhood spokesman, Gehad El-Haddad, described what was happening as a “full military coup.”

“Tanks hv started moving thru the streets,” he said in a Twitter posting.

But Naguib Abadeer, a member of the opposition Free Egyptians Party, said what was under way “is not by any means a military coup. This is a revolution.”

“The people have decided that Mr. Morsy was no longer the legitimate leader of Egypt,” he told CNN.