Radio Biafra cultists desperate to further an agenda to instigate have allegedly burned three Dangote trucks and attacked and shot citizens and at least one soldier in Onitsha. The Central Mosque was also reportedly burned down by the Radio Biafran protesters in the state; also a Suya seller was shot by the protesters and died of his bullet. 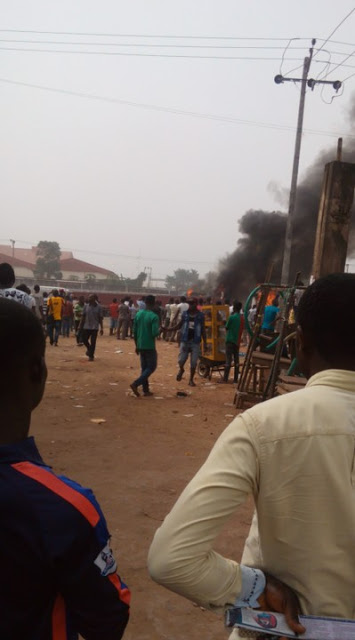 Hmmmmm, right now am scared and confused at to what these miscreants protesting in the name of Biafra wants, News reaching me says, the protesters have burnt down three trucks reportedly belonging to Dangote group of companies, two full loaded and one empty and also shot a military personnel. I hope their sponsors are watching and listening because if the Nigeria should retaliate, they should not cry foe. Am just sorry for the youths who would fall victim to these terrible movement and am sure that PDP is behind this whole nuisance. One begins to wonder why they never made any noise during Goodluck Jonathan’s tenure. Are these the manifestation of PDP agents saying that should Jonathan loose the country will burn?-JG

NewsRescue intercepted communication between Radio Biafra zealots who had discussed how they could possibly instigate anti-Igbo sentiment in the north to trigger attacks against Igbos and cause an exodus.

The intercepted communication revealed that the Radio Biafrans were actually planning to burn Igbo homes and assets in the north as a last resort to trigger Igbo exodus.

The protesters are protesting for the release of seditious radio station broadcaster and British citizen, Nnamdi Kanu, real name, Nwannekaenyi Kenny Okwu-Kanu who was picked up by Nigerian security operatives on October 14th in Lagos. he is held on involvement in terrorism and terror financing, running a seditious radio and related treason  charges. He was declared wanted in March of 2015 by the Imo state police command when he was found purchasing high caliber machine guns from gun dealers.

As group leader, Nnamdi Kanu remains detained on charges of sedition and terror, the group members who took a blood oath to fight for ‘Biafra’ or die have become desperate to free their boss and have decided on means to provoke. We will keep you updated on the happenings as we urge Nigerians to leave justice to the capable law.

“Our patience has been stretched thin,” the Arase said, “Any person or group of persons so arrested in furtherance to the enforcement of this order will be made to face the full wrath of the law”.

“The warning followed the observation by the Nigeria Police Force leadership of the increasing resort to acts of brigandage by sets of misguided individuals who apparently are hiding under the cloak of Movement for the Actualisation of Sovereign State of Biafra (MASSOB) and Indigenous People of Biafra (IPOB) to threaten national security and public peace in parts of South East geopolitical Zone and some other coterminous States.

“The latest manifestation of this threat is the attempt to blockade the Onitsha end of Niger Bridge on 1stDecember, 2015, an action that caused major hardship to innocent and law abiding motorists, and citizens. The act also occasioned serious dislocation of business activities.

“The Inspector-General of Police notes that the increasing resort to acts of brigandage of this nature is pointing to a clear attempt by the brains behind these protests to test the will of security agencies to restore order and guarantee internal cohesion.

“For the avoidance of doubts, the IGP further notes, the restoration and maintenance of law and public order, and protection of lives and property remain sacred and statutory Mandate of the Nigeria Police. This Mandate, according to him, shall be fully executed in the overriding interests of the nation and vast majority of citizens and residents of the South East geopolitical Zone.

“Consequently, the Inspector-General of Police has directed the mobilisation and deployment of Police Mobile Force (PMF) across the country to reinforce security in the State Commands that MASSOB and IPOB are currently attempting to utilise as launching pad for their sinister intentions. The Assistant Inspectors – General of Police Zone 5, (Benin); Zone 6, (Calabar) and Zone 9 (Umuahia) as well as all Commissioners of Police in the affected States in the South East and neigbouring States have also been directed to henceforth maximally exercise their statutory Mandate in relation to prevention and disruption of any gathering that threatens public order and national cohesion. Any person or group of persons so arrested in furtherance to the enforcement of this order will be made to face the full wrath of the law.

“To this end, the Inspector-General of Police advises parents and guardians to call their children and wards to order as the patience of the Force is being stretched to the limit.