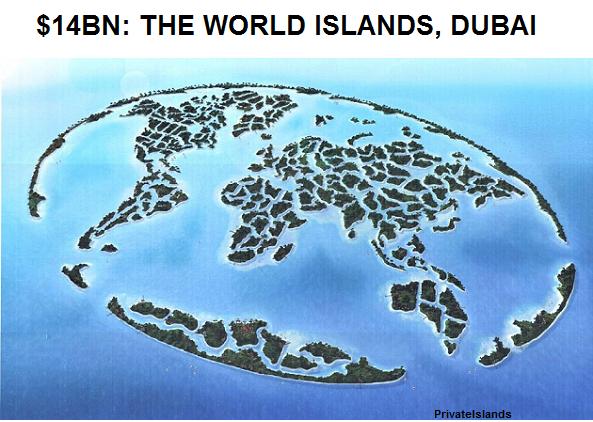 Nigeria’s Central Bank governor, Sanusi Lamido Sanusi has declared $20 billion missing in what can be described as one of the largest heists in the history of this planet. Off the coast of Dubai, in a project conceived by the ruler of Dubai, Sheikh Mohammed bin Rashid Al Maktoum, Nakheel properties raised an archipelago of 300 Islands from the sea bed. These wonderful private Islands built of 321 million cubic meters of sand and 386 million tons of rock, were formatted according to the continents of the World. The project cost $14 billion and is a world wonder. $20 billion dollars is a tall sum. Though Nigeria’s annual earnings from oil stands at about $80 billion, the nation’s budget is $29 billion. $20 billion we are looking for is 2/3rds our annual budget. It is a great abomination for the people’s $20 billion to have been subverted or stolen. The possibility that such a sum may be missing as is being analyzed is already a serious abomination.

There are several points being discussed and necessary to review in the case of the missing dough.

To the question on whether SLS may have raised the issue of the missing billions as a political move; a revisiting of the process by which this issue came about is pertinent. On September 25, 2013, Nigeria’s CBN governor Sanusi sent a private memo to President Goodluck Jonathan and the minister of the economy, Ngozi Okonjo-Iweala, detailing that the NNPC had possibly diverted $49.8 billion worth of crude oil sales proceeds between January 2012 and July 2013 and not remitted this funds to the Federation account. This was a private memo, requesting the president’s attention to the matter. If this was a politically motivated move, Sanusi would have come to the press with these findings. He did not. He followed due process. Sanusi at this time did not claim $49.8 billion was missing; his memo was simply an urgent ‘invitation to investigate.’ This was an action conducted professionally. This is what we demand of our serving executives and appointees in any matter where they suspect fraud.

According to the public narration, President Goodluck Jonathan recklessly dismissed the critical memo and did nothing about it. 3 months later, the letter was leaked to the press. We can accuse SLS of facilitating this leak, but should we be upset with this? If indeed the president of Nigeria simply dismissed such an important matter, we Nigerians need supernatural intervention, which may include leakage of the memo to get the president to address such matter and investigate either the NNPC or SLS to see which of his appointees had made the grave blunders. It is important to clarify and discount several unprofessional newspaper headlines that suggested that Sanusi made a u-turn, claiming he had never said $49.8 billion was missing; what he had said, that many spinal editors had misconstrued was, he never said $49.8 billion was confirmed missing, he had only raised as his letter dated 25th September details, that $49.8 billion may be missing. There is a big difference between ‘may be missing, we need to investigate,’ as he wrote and ‘is missing’ as headlines had initially phrased it.

Sanusi told Senator Ahmed Makarfi: “I repeat, Mr Chairman, that we did not see the letter as a conclusion of our investigation but an invitation to investigate…”

After a brief reconciliation meeting, in an attempt to investigate the unremitted billions Sanusi had raised, the conclusion was that a whopping $10.8 billion was nowhere to be found. This treacherous finding was confirmed by the Minister of finance, Ngozi Okonjo-Iweala, who said: “I just wanted to add that we found about $10.8 billion (un-reconciled).”

$10.8 billion missing is a matter of national emergency. By this point Nigerians should have been up in arms.

Now, after the reconciliation meeting during which it is understood that the NNPC provided documents and explanations to account for $39 billion, Sanusi as is appropriate and expected of the nation’s CBN governor, went to his office to review the information and defense presented by the NNPC. He found on cross-examination, possibly after noticing fake documents and duplicated entries, that even with the yet un verified-by-experts evidence provided by the NNPC, $20 billion was  yet unaccounted for.

Was SLS changing his words? The answer is No! Any matter of such complexity, be it at an ordinary corporation level or at the government level, requires an initial alert, an investigation and a careful tracked cross-examination of the presentations at the investigation. Sanusi had just concluded his review of the defense and evidences presented at the reconciliation investigation and still found $20 billion possibly missing. His duty we Nigerians need him to do in a time of national disarray and suffering, with enshrined and protected government corruption, was to continue with his investigation and return all findings as he found them.

A recap: The alert was that up to $49.8 billion may be missing. The reconciliation investigation attempted to prove that ‘only’ $10.8 billion was missing, and the cross-examination revealed that despite the reconciliation, $20 billion was still ‘missing.’ This is not inconsistency; it is the way of these matters.

On the timing of his release; well, better late than never, in Nigeria where no tool against evil works, early or late. I must state that I am a critic of Sanusi Lamido Sanusi, and my penned harsh criticism of his legacy is a published item.

As the matter spiraled, the Minister of the Economy, Ngozi Okonjo-Iweala from the World Bank, surprisingly and shockingly expressed that to address this issue, forensic auditors will be needed. This was a new abomination in the case of the missing elephant in the room. $20 billion is simply not the type of sum of money that it is hard to find. What is the job of her office if not to be able to present as and at when demanded an accurate to the last $1 million, account of the nation’s income and expenditure? This is not current funds; this is an account of missing funds between January 2012 and July 2013. The admission that forensic editors were needed was scary to the nation and a revelation that the ministry of finance was grossly inept and requires a total overhaul. At the resolution of this matter, at the very least, the minister of finance should be retired for dangerous incompetency.

Further insulting Nigerians and demonstrating disgusting rabid insolence, the nation’s NNPC boss under investigation, Diezani Alison-Madukwe was reported to have said that any investigation of said missing funds must date back to 2004, when the predecessor and GEJ godfather Obasanjo regime was in office. This was a clear attempt to blackmail and it followed a failed attempt to sack the nation’s CBN governor, SLS, by President Jonathan.

Though an investigation of Nigeria’s 4th republic so-far, starting from the day ex-president Olusegun Obasanjo assumed office, till date is very much a paramount need of the nation; her making such careless threat in this economic terror crises matter of national security, importance and concern was abominable and showed maniacal carelessness.

NNPC in defense of the missing billions of dollars had claimed that the money was used to subsidize kerosene. This claim and explanation is actually an admission of fraud and active engagement in robbing from Nigeria’s poor.

The Yar’adua government stood-out separate from the Obasanjo and Goodluck Jonathan administration as relates to this monstrous scam. Yar’adua was disgusted by this humongous theft of the people’s money and he gave an executive directive as documents reveal, to stop the nonexistent subsidy. Kerosene was not subsidized. Kerosene is sold in Nigeria for up to N150 – N300 per litter. This is an exorbitant cost to purchase the product. Where is the subsidy when marketers are selling the product for N150+/liter? The late president directed the relevant authorities to eliminate subsidies on kerosene as this did not reach the intended beneficiaries. The directive by late president Umaru Yar’adua was conveyed in four separate memos by his Principal Secretary, Mr. David Edevbie.

Quoting a paragraph from Olusegun Adeniyi, the spokesperson of late President Yar’dua in an article in Thisday on the 13th of February, 2013:

In the “Volume One” of their report submitted in June 2012, this is what the federal government committee wrote about kerosene subsidy: “…in spite of a directive issued by President Yar’Adua on June 15, 2009 that NNPC should cease subsidy claims on kerosene, PPPRA resumed the processing of kerosene subsidy claims in June 2011 and NNPC resumed the deduction of kerosene subsidy claims to the tune of N331,547,318,068.06 in 2011. In addition, the distribution of DPK which was being imported solely by NNPC was skewed in favour of depot owners who have no retail outlets…Two-thirds of the kerosene sold by NNPC between 2009 and 2011 was sold to depot owners and ‘middle men’ who in turn sold the product to owners of retail outlets at inflated prices of between N115 and N125 per litre (compared to the ex-depot price of N40.90), leaving consumers to pay higher prices than the N50 per litre directed by Government. For several years now, the country has been incurring huge subsidy bills for kerosene and its citizens are not receiving the benefit – instead the country has been financing ‘rent’ for the middlemen.”

The NNPC in this elaborate scam, transfers $8 million to the cabal in the so-called subsidy everyday! According to this 419 scam, the NNPC under Diezani Madukwe claims they are subsidizing our kerosene, and making it available at N40.9/liter to marketers for it to be sold at the pump for N50/liter. The NNPC claims to import 10 million liters product per day at an import cost of N156/liter. The NNPC has its handful of Cabal portfolio marketers who are given the ‘subsidized’ rate kerosene at N40.9/liter. But as we all know, they resell it at a non subsidized rate to retailers thus pocketing N100+ on the liter and billions for themselves and their government friends.

The simple test for any Nigerian who wishes to confirm if the NNPC and Goodluck Jonathan administration are stealing from them or not, is—what is the price you buy kerosene? If it is N50 per liter, then the subsidy is real and the $8 million daily ‘subsidy’ is going to ease the cost of living for 170 million Nigerians. If you buy it any more than N50/liter, whatever extra you pay on top, multiplied by the millions of gallons sold nationwide is the volume of fraud and broad day light robbery that greedy and wicked people at the top are using to exploit you and amass insane wealth which always ends up directly or indirectly sponsoring terror and creating suffering and insecurity in Nigeria.

The Bible says in Proverbs 25:26: “A righteous person giving way to the wicked is like a contaminated spring or a polluted fountain.” In lieu of the precarious state of the nation’s finances and the wicked looting by a handful of rapacious civilians, who rob us without even using  guns as we were forced to be silent under during the Babangida-Abacha regimes, shall we continue to tolerate and succumb to the wicked and remain muddied and polluted as the Bible describes? The wicked may have ‘chanced’ our parents’ generation, but will we let them chance us? It is time Nigerians said, no! No more! We will recover our money and authority thieves will be impeached, dismissed and/or go to jail as applies.