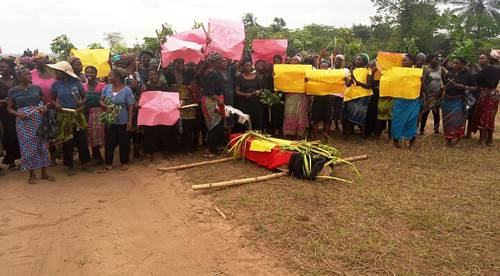 Eighty-seven-year-old Alice Agbemrehwue Omadefe of Ovre-r’Eku, Ethiope East Local Government Area of Delta State is reported missing after soldiers recruited by Presco Plc and Newcross Petroleum Limited attacked over 500 women protesting. The protesters have said that their oil wells and farm lands have been forcefully taken over by the two companies and the Edo State Government.

SaharaReporters learned that the protestors, armed with green leaves and a mock coffin covered in palm fronds, converged in the Ovre-r’Eku community where they marched to the disputed area to express their displeasure at the alleged sale of the land to the oil companies.

According to an eyewitness, when the women arrived at the scene they were confronted by soldiers led by Unit Commander Lt. E.D Oworobo. The commander cocked his rifle and ordered his men to deal mercilessly with the women, who were flogged, booted, and assaulted.

“As the women were running for their lives, the soldiers continued chasing them. While some of the women in their eighties who could not run were caught by the soldiers and trampled upon with their boots. Others were flogged with sticks and horse whips,” the witness said.

“As if that was not enough the soldiers again went on a rampage and invaded the Ovre-r’Eku community. They destroyed properties, motorcycles and bicycles belonging to residents of the community,” the eyewitness stated.

SaharaReporters reliably gathered that at the time of this report the missing octogenarian, along with scores of other women, have yet to be found.

It was reported that the soldiers threatened to kill journalists working for Vanguard and The Authority newspapers, who were at the scene to report on the disturbance.

Locals condemned the attack on the harmless protestors. During a stakeholder meeting with the people at his palace, Ogurimerime Ukori I, the traditional ruler of the Agbon Kingdom, vowed to pursue the matter to a logical conclusion.

“We have reached out to the 4th Brigade, Benin city where the soldiers were deployed from and we will be working closely with them and the Delta State government in addressing the attack on the women,” the monarch said.

Also reacting, a Warri-based human rights lawyer, Mr. Oghenejabor Ikimi, noted that the attacks were a gross violation of the women’s right to peaceful protest. He vowed to file a suit against the unit commander, the 4th Brigade, Benin city and the Chief of Army Staff. It will be recalled that SaharaReporters published a series of investigative stories in 2015 on the 19th Battalion, under the 4th Brigade, for executing a civilian who reported on how they were working with local criminal gangs to steal oil and other illicit activities.

Also condemning the attack, the Delta State House of Assembly on Tuesday called on President Muhammadu Buhari to direct the Chief of Army Staff to carry out a full scale investigation into the unlawful attacks on the women. The house further called on the management of Presco Plc and the soldiers to locate the missing eighty-seven-year-old woman.