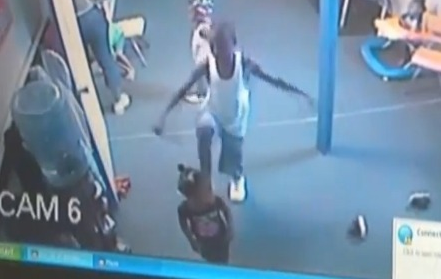 NewsRescue- You might want to think of this when next you drop your child off at the neighborhood daycare, or perhaps a bit earlier, when both you and your wife decide you both must work the same shift to make that cash. This unbelievable incident took place at the same daycare where just a few days earlier a dad was arrested for having beaten a girl (the wrong candidate) after he saw his child had been injured while at the daycare. Here’s the story:

Disturbing video from a Mississippi day care center shows a 9-year-old boy beating several much younger children, including an 11-month-old, whom he punches and bites.

The frightening footage, taken at the Kiddie City Child Care Center in Vicksburg, shows the bully attacking the baby and then patting the boy on the back as it cries and adults come in to check on them. Throughout the video, the child can be seen waiting until day care workers aren’t looking to launch another attack.

In another instance, the 9-year-old drop kicks a young girl to the floor while a day care worker is standing just a few feet away looking out the window. Minutes later, the boy picks up the girl and kicks her directly in the chest, knocking her to the ground.

The boy appeared before a judge in youth court with his mother Tuesday. Because he is under 12, he does not face any criminal charges, and police say any punishment likely will be aimed at rehabilitation, not punishment.

Vicksburg police arrested a day care worker, Sandra Trevillion, and charged her with two counts of contributing to the neglect of a minor. Trevillion, who has since been fired from the Kiddie City Child Care Center, is out on bond and scheduled to be in court on Monday.

Parents and workers told FoxNews.com the boy has a history of fighting with others and that this wasn’t the first time he took to beating helpless toddlers.

A worker at the Kiddie City Child Care Center, who did not want to be named, said the children are supposed to be separated by age during the day, but that the boy attacked when all of the children were brought together for pick-up.

Jamie Williams told FoxNews.com his 1-year-old daughter came home on July 16 with bite marks on both her neck and cheek that were still bleeding, and his 11-month-old son also had bruises on his head.

“They were just crying. They can’t talk, so I can’t get it from them. They couldn’t tell me (what had happened). They was just crying,” Williams said.

Williams says when he went to the Kiddie City Child Care Center to find out what had happened, workers told him they had no idea.

Williams then went into the day care and slapped the boy he thought was responsible. But turns out, it was the wrong boy.

“I wasn’t going up there to do that,” Williams said. “I shouldn’t be hitting no child regardless, but you know, since I did do it, I wish it would’ve been the right one at least.”

Williams is facing a misdemeanor simple assault charge and is scheduled to appear in court on Monday.