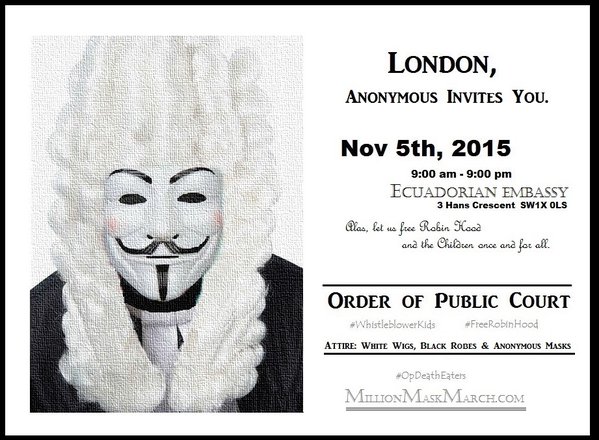 Tens of thousands of activists disguised as Guy Fawkes are expected to the flood streets of over 671 cities as the Anonymous-led Million Mask March sweeps the globe. The hacktivist group and its followers will protest censorship, corruption, war and poverty.

For the fourth year in a row the “Anonymous army,” as the group likes to call its activists, will rise up and take part in rallies and protests from Sydney to Los Angeles and Johannesburg to London.

Go out tomorrow and meet your brothers & sisters with open arms Love each other and hate the system https://t.co/MnO855noVd #MMM2015

Hiding their faces behind stylized ‘Anonymous’ masks popularized by the “V for Vendetta” movie, they will come forward to make their voices heard.

The Million Mask March is also about letting “various governments” know that “the free flow of information” will never be stopped.

“We now face a dilemma unfamiliar to any previous human civilization, we face this dilemma not simply as a community, nor a nation; rather collectively as a planet. We have something no previous generation has ever had, the internet,”Anonymous said in its 2015 promo video for the Million Mask March.

Social media has been their major megaphone calling on people to unite in a global move. Anonymous started trends on Twitter such as #MMM, #MMM2015, #MillionMaskMarch, and #Nov5th that are now full of slogans and pictures.

Just like last year, London expects one of the most massive marches on its streets. According to the demonstration’s page on Facebook, 18,000 people are going to join the Anonymous-inspired march.

“The government and the 1% have played their hand, now it is time to play ours,” a Facebook statement reads.

Scotland Yard is to deploy thousands of extra police officers and impose tough public order restrictions over fears that a Bonfire night protest in London against austerity and increased state surveillance will turn violent. Read full on Guardian