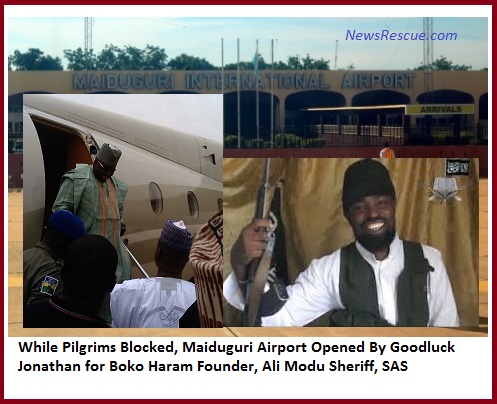 Is SAS More Important Than Muslim Pilgrims For The Presidency?

On Friday June 27, 2014, two hundred and seventy six (276) out of the over four thousand (4000) intending Umrah pilgrims from Borno and Yobe state were barred from boarding a Max airline at the Maiduguri international Airport to Saudi Arabia for this year’s Umrah lesser (HAJJ) during the Ramadan period on security grounds.

Despite repeated plea for the Aircraft to allow the already checked in passengers on board the Aircraft went to their deaf ear they went ahead to the Airport indefinitely.

The stranded 276 pilgrims had to travel to Kano by road throughout the night where they were airlifted to Saudi Arabia in answer to Almighty Allah’s kind invitation and pray for peace to return to both Borno and Yobe states that live in solitude and the country in general.

However to utter disbelief of everyone the same federal government directed the Maiduguri international airport to be reopened for almighty Senator (Dr.) Ali Modu Sheriff to land in his private jet on Monday July 14, 2014 exactly 17 days after the closure of the airport. On his arrival, the flamboyant SAS was received and escorted to his residence under a heavy military escort reminiscent that of the visiting President.

This was right at the heel of a military source who told the daily trust newspaper correspondent recently that all military attached to serving Governors have been withdrawn and that this action was not peculiar to the Borno State governor Alhaji Kashim Shettima  who was denied military escorts to visit victims of Boko Haram attack in Borno state. The military source said all governors are now under security watch of the police and the directorate of SSS. Because of this, Governor Kashim Shettima appeared to have been chained to remain in Maiduguri without the slightest chance of visiting Boko Haram victims to sympathies and share their pain and agonies and provide them with relief to cushion their hardships.

Even when Governor Kashim Shettima’s junior brother Abba Shettima sustained multiple fractures as a result of motor accident recently, the Governor had to take the risk to travel to Kano by Road to see his ailing brother on the very day the airport was reopened for Ali Sherrif to fly in.

Ali Sherrif came to Maiduguri to test the ground preparatory to his decampment to the PDP sometimes after the Ramadan fasting period. The question is, does president Goodluck Ebele Jonathan’s PDP federal Government consider this two parallel actions just and right and is Ali Sherrif more important to them than the over 4000 Umrah pilgrims or is the safety of a sitting governor less important in preference to politics?

The Ali Sherrif that is considered as a political gladiator was at one time described by Senator Bola Ahmed Tinubu as a mole in APC. The APC which is an opposition party appeared to have rejected him and all his candidates at the party’s national convention on June 12 only for the PDP and president Jonathan appeared to be warming up to receive an APC political rejectee  seems to underscore the PDP’s desperation to win at the 2015 polls.

Public opinion sampled in Maiduguri yesterday has it that for Ali Sherrif to have contested for the senate four times and lost one to senator Ahmed Zannah in PDP in 2011 and served as a two term Governor in Borno from 2003 to 2011 have not for one single moment sent a condolence message let alone bother to come to Borno to commensurate with the people whom he regarded as his own just like the federal Government and the presidency, tantamount to acts of betrayal to which they sounded unforgiving.

Furthermore, gauging the political impulse of the over four thousand Umrah pilgrims that had to travel from Maiduguri to Kano, appeared to have beaten their imagination hollow in a horrific manner and total disbelief that SAS is more important than them in both Borno and Yobe state.

Their consensus view was that why politics was a man made arrangement to achieve their self-determination, the issue of religion is the exclusive preserve of the God Almighty and that it is fatalistic to anyone to accord politics greater preference over and above religion. It is therefore their candid opinion that one can toy around political cliché’s but not to treat one’s religious faith with unbelievable levity and this is where the PDP Federal Government under President Goodluck Jonathan by denying 4000 Muslims from being airlifted from Maiduguri to perform this year’s lesser Hajj but at the same time reopen the airport for SAS to land in his private jet in a flamboyant manner is to say the least regrettable political hara-kiri.

For anybody who play or try to play God should realize that this world that has hidden our ancestors beneath is also waiting our own remains. Therefore those of us who are the relations and friends of the over 4000 Umrah peoples should continue praying for their safe return home and everlasting peace to once again reign in the country.

We have suffered a lot since 2009 to date, we have lost so many of our own brothers and sisters, parents, relations and we are still suffering and losing more on a daily basis without fault but we should continue to remain prayerful for not only the insurgency to come to an end within the shortest possible period but also we the Nigerian masses shall express our esteem assurances come 2015.

Finally it would not be out of place to appeal to our armed forces to distance themselves from politics and remain as independent umpire and play their statutory role of protecting the territorial integrity of our fatherland against external aggression as one indivisible country.

It is not politically correct for the ruling oligarchy of military men around the president to allow the security apparatuses to be used to harm, intimidate or harass political opponents since we are under a democratic practice and not under a ruler with total power over our country. Typically we must let everyone know that Goodluck Jonathan has not obtained power by force and so cannot rule us by force but through the strict application and compliance of the rule of law.