Mr. Adnan Oktar responded to the black propaganda against Turkey started on Twitter, with the Hashtag #TeröristPKK YPG 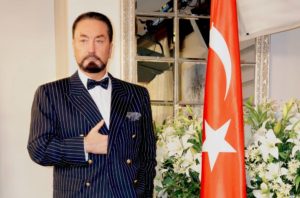 After the attack of ISIS aimed at the region in the vicinity of Kobani’s Mürşitpınar Border Gate, it has been claimed that those who organized the attack passed into Turkey from Kobani after the attack. These rumors have been refuted by the authorities with documents and it has been determined that the ISIS members infiltrated into Kobani from Cerablus, Syria wearing YPG uniforms. However, despite this fact, some dark powers portrayed Turkey as  responsible for the incidents in social media and proceeded with the preparations of a new provocation.

Following the attack of ISIS, a black propaganda campaign against Turkey, who actually opened her borders to both the wounded from Kobani and to  Kurdish refugees, was started on Twitter. Sympathizers of the PKK and YPG claimed that the ISIS militants came to Turkey after the attack and they started a hashtag for Turkey accusing her of being a “terrorist” supporter. The hashtag  #TerroristTurkey (in English) soon became one of the top trending topics.

On the same day, Mr. Adnan Oktar started a hashtag on his live broadcast on A9TV against this atrocious attack; #TeröristPKK YPG.  Mr. Oktar called on all youngsters from the AK Party, the MHP, the BBP and the Felicity Party to support this hashtag and to show the power of the Turkish youth against this atrocious slander.  This hashtag Mr. Oktar started  soon overtook the hashtag PKK supporters started to defame Turkey on Twitter and became one of the highest ranking Top Trending Topic on Turkey’s and the world’s agenda.

Stating that Turkey had nothing to do with the attacks of ISIS, Mr. Adnan Oktar reminded the audience about the fact that the PYD, PJAK or the YPG are no different than the PKK and drew attention to the fact that they all are communist organizations acting under the banners of Öcalan and the PKK, and that they actually are identical to the PKK. Furthermore, Mr. Oktar noted the fact that it was again the PKK who introduced violence and horror to the region and who spreadterror in the region.

Mr. Adnan Oktar called on all of Turkey to support this hashtag and to explain the facts to the world and said,  “None of our Turkish youngsters should ever accept such a treacherous world-wide attack against our country.” And Mr. Oktar’s call had wide repercussions in a short time and the hashtag #TeröristPKK YPG became one of the highest ranking topics on Twitter TT lists.