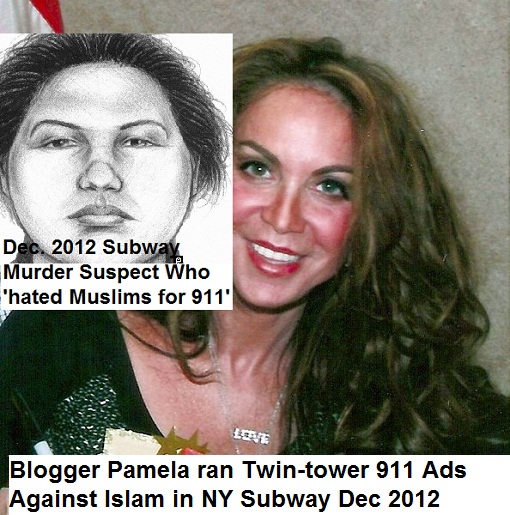 As a Muslim, I say yes, it is true that there are people who incite wars under the guise of Islam and who encourage violence and bloodshed. And yes, the worldview formed by bigots which is deprived of mercy, love, compassion, tolerance is horrifying. However this bloodthirsty system that emerges in the name of Islam is not the true face of Islam and is in fact diametrically opposed to it.

That is why we are on the same side with Westerners in their struggle against bigotry because there is love, peace, democracy, liberty, happiness, modernity and quality in the Qur’an. However the way to oppose and wage an intellectual campaign against bigotry, radicalism and terrorism is not through hateful speech, not through stirring up agitation, angst and mistrust against Muslims in general.

District Attorney Richard A. Brown identified the woman as Erika Menendez. She was awaiting arraignment.

“(She) said in sum and substance ‘I pushed a Muslim off the train tracks because I hate Hindus and Muslims ever since 2001 when they put down the twin towers I’ve been beating them up,’” the prosecutor said in a statement

The correct way to follow is to make an accurate discrimination between the true Muslims who abide by the pure teachings of the Qur’an and the radical fundamentalists who follow a path in no way compatible with the true nature of Islam.

Yet another provocative anti-Islam message has been hung in subway stations in the New York area thanks to the initiative of controversial anti-Muslim blogger Pamela Geller.

Once again, Mrs. Geller takes a Qur’anic verse out of context and tries to provoke people against Islam by misinterpreting it. She is hoping to encourage her fellow Americans to turn against their fellow Muslim citizens by instilling fear in them, by attempting to show Islam as a religion of violence and to achieve this, she taps into the sensitivities of people through demagogy and propaganda methods. This is a deeply prejudiced and deceptive way of behaving.

She and her fellow-travelers, who are trying to incite hatred against Islam with similar tones, hope to incriminate the 1.5 billion Muslims that practice Islam as a religion of peace and love. By spreading fear and misinformation, they seek to equate Islam with savagery. These badly misguided people strive to make others deaf to the words of those Muslims saying that there is no room for terror and violence in true Islam and they deliberately try to depict all terrorists as Muslims and Islam as the source of terror.

Let’s face the true facts: All three monotheistic religions have ancient scriptures that contain passages that talk about war and using violence. One can easily compile from each of these traditions a selective list of sources that could inflame hatred. And anyone can just as easily find in Jewish, Christian and Muslim Holy Books many verses that support peace, love, justice, co-existence and tolerance. If some Christians are able to use the Qur’an in their efforts to portray Islam as a warlike religion, then Muslims could easily point to far harsher commandments from the Holy Bible to show that Judaism and Christianity are brutal religions, may God forbid, and these are far more numerous than the accusations made against Islam. But Muslims evaluate these commandments in a highly rational manner. They do not use them to stir up hostility toward Jews and Christians and produce no strange, misleading or dubious interpretations from them.

Muslims do not adopt that perspective, because Muslims are well aware that our infinitely loving and merciful Lord would never create such a religion. Therefore, it is all a question of the interpretation, intention, wisdom and conscience of the person looking at that faith. It is therefore impossible to ascribe the actions of hypocrites, who use religion to spread the peculiar ideas of fanatics, who spread their own perverse thoughts in the name of religion to the Divine faiths themselves.

People spreading false accusations, slanders, defamation against Islam subject others to a subconcious indoctrination against Muslims, and the result can sometimes be far worse than hate. Under the rubric of the “war on terror”, Muslims are being exposed to discrimination, contempt and exclusion by being treated as potential “terrorists.” Those who portray people as one another’s enemies instead of friends, who sow the seeds of hatred among them and who engage in establishing artificial poles bear the same responsibility as those who put those ideas into action. The propaganda techniques being used by Mrs. Geller are, ironically enough, extraordinarily similar in tone and theme to those used by European anti-Semites during the 19th and early 20th Century, and anyone who’s even remotely familiar with modern history knows all too well the consequences of that hateful attitude.

If we are genuinely seeking for peace, love and brotherhood in this world, we can’t achieve this with hate propaganda. If we adopt a destructive tone, a tone that impairs peace, how can we call it a peaceful talk? Peace has a special language. There cannot be any offending tone, no incitement, no hatred in the language of peace. If we want peace, we need to keep our tone in check, use a language that soothes the heart, and calm things down. We need to use a tone that is peaceful, wise and fair. Love and compassion should be dominant in the tone we speak. Otherwise, if we don’t refrain from using destructive language, it would accomplish nothing but be of assistance to war-mongers and blood-shedders. That is why one has to approach others with love, wisdom and maturity, and with the modest, noble tone of the Torah, the Gospel and the Qur’an.

Sinem Tezyapar is a political and religious commentator from Turkey, and an executive producer at A9 TV. She is also the spokesperson of a prominent international interfaith organization.