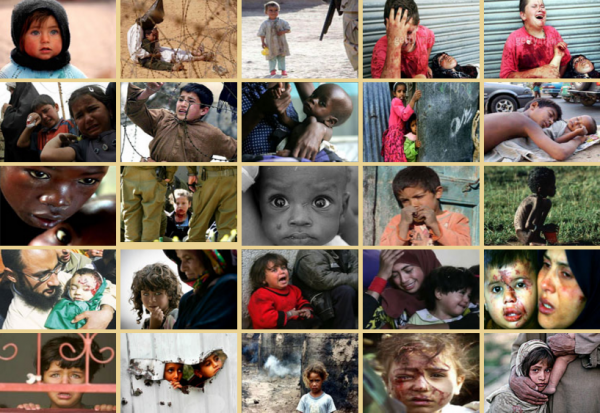 There has never been a time in history when Muslims suffered like they suffer today. Not even the siege of Baghdad in 1258, when 200,000 Muslims were brutally martyred, or the siege of Jerusalem, when Muslims’ blood was said to have reached the Crusaders’ ankles, can rival what’s happening today.

Today the cries of Muslims shouting for help are reaching the skies, but not the ears of the Western world. Today, the war that is waged but never officially declared against Muslims is a war that doesn’t discriminate between children and elderly, men and women, civilians or soldiers. This war entails killing Muslims in the thousands without any accountability, accusing them for everything that is wrong, idly watching them drown at sea, suffocating in airless trucks, being manhandled and mistreated at refugee camps. It is ignoring their ordeal no matter what.

But why? Can there be ever a good reason to treat a fellow human being like that? Could the authors of the Universal Declaration of Human Rights ever imagine such an extensive violation when they first drafted the document?

It is true that the radical interpretation of Islam, which is diametrically opposite to the real Islam found in the Qur’an, has played a major role in creating this anti-Muslim sentiment across the world but nothing can justify such an inhumane hostility.

To explain our point further, let’s take a brief tour around the world and see how Muslims are doing in the worst scenes of Muslim persecution.

Iraq: Muslims in this country had been suffering even before the US occupation began. The iron fist of Saddam had already brutally martyred thousands of civilians and tore many families apart. However, the US occupation that was said to be for democracy and for world peace in general, brought nothing but more pain to the country and the world. Not only did it destroy Iraq both physically and mentally, according to a report by Washington DC-based PRS[i], ‘the US-led war from 1991 to 2003 killed 1.9 million Iraqis; then from 2003 onwards around 1 million: totaling just under 3 million Iraqis over two decades.’ And this number doesn’t include thousands of families torn apart, millions forced to flee their homes, thousands tortured and abused at prisons. Another report claims that US forces had killed 5000 Iraqis a month by the end of 2006[ii]. This is nothing short of a massacre, but somehow got very little attention or coverage in world’s media. Furthermore, the US-led war brought out a bitter and bloody sectarian divide in the country. Today, living under constant threat of bombs, losing family members and being reduced to living as refugees, have become the norm for Iraqis.

Syria: After the civil war started in 2011, more than 11 million Syrians were displaced, 400,000 civilians killed, and almost the entire country has been razed to ground[iii]. But even this shocking picture wasn’t enough to stir the conscience of the most people in the world towards Muslims and Syrians were left alone to fend for themselves for the most part. Only a few countries, which were also relatively developing countries themselves, like Turkey, Jordan, Lebanon and Iraq offered a helping hand. Majority of the people, who are capable of funding TV shows to turn them into movies, or sparing money to throw out lavish parties, kept mostly quiet when it came to Syrians. But even that wasn’t the end for the Syrians’ suffering. Today they have to put up with a shockingly cruel treatment, racism and heartless rejection by some European countries that don’t want to give them shelter and food. It looks like many people in the world cannot be moved even by the most painful incidents, like pictures of toddlers washing up on Europe’s shores or elderly people being manhandled by European police.

The Rest of Asia: Asia tells many painful stories of Muslim suffering. Due to blatant human right violations prevalent in the continent, downtrodden Muslims that already cannot get any sympathy from the rest of the world are naturally ignored even more here. The Rohingya, living in Myanmar is the one of the most severe examples of such abuse. Called ‘the world’s most persecuted people’ by the UN, thousands of poor Muslims, including women, children and the elderly are hunted down, tortured and even burned alive by angry so-called Buddhist mobs that enjoy unofficial state support. Those who manage to escape this violence have to live in outdoor prisons set up by the state, or try to flee on unsafe boats to unwelcoming neighboring countries. Who can forget about those 8,000 Rohingya that were left to drown in the ocean on makeshift boats without any food or drink because no country wanted them? And what about those who fell into the hands of human traffickers just as they thought they reached safety in Thailand, and were later found in mass graves? Once again the Muslims are suffering unspeakable crimes, and once again the world don’t seem to care.

China: Muslim East Turkistanis has been suffering from severe human rights violations for decades. Executions, torture, arbitrary arrests, abuse, limitation of religious freedom are only some of the problems that Uighur Muslims suffer from. Although there have been some commendable developments on the side of the Chinese government, it is clear that more concrete steps are required to ensure the peace and welfare of all communities in China regardless of their ethnicity or religion.

India: Some Muslims are known to be widely persecuted in India, although there they form one of the largest Islamic communities in the world.[iv] Up to 200,000 Muslims were believed to have been killed in pogroms in Hyderabad during the Partition Crisis of 1948. During 2002 Gujarat riots, up to 2,000 Muslims were killed in religious riots of unspeakable violence. It was later revealed that women and children were deliberately targeted and tortured and massacred in unspeakable ways. The impalement of children and infants is the only thing that can be written here amongst those unspeakable atrocities committed against Muslims civilians during the Gujarat riots.[v] Although such horrible crimes are regrettably common against Muslims in various parts of the country, there are also places where Muslims and other communities co-exist in a peaceful and harmonious way, like Hyderabad. In this state, Iftar parties will also be organised by the government in 100 mosques. Also the new Prime Minister Modi visited various Muslim countries, signaled that he will work for the welfare of Muslims and paid a visit to the Sheikh Zayed Grand mosque in Abu Dhabi. These are all very good signs and we hope they will continue.