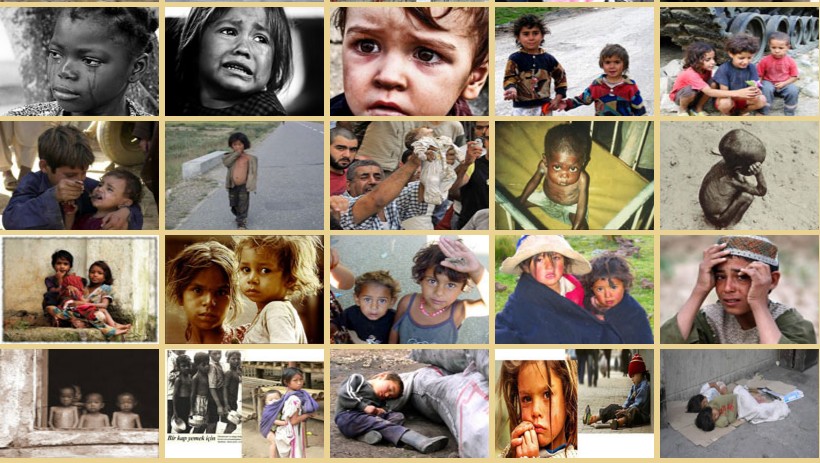 Africa: This continent has a painful history full of abuse mostly at the hands of the Western colonial powers. However, these poor peoples’ suffering hasn’t come to an end with the ‘so-called end’ of the colonial era. Not by far. Exploitation continued in different forms and today the peoples of the continent face extreme hunger, poverty and never-ending violence. And when Muslims are in the center of a continent like that, their suffering is doubled. To cite a recent example, the violence targeting Muslims at the hands of Christian mobs horrified even UN officials. According to an account, ‘as Muslims were leaving in trucks, one Muslim man who fell off the truck was killed and his body was mutilated by Christian mobs.’[i] Even worse, children were targeted and accounts of those horrible violence including beheading found coverage in Western media[ii].

Darfur, Sudan, home to a large Muslim population, saw another wave of shocking violence, that had Muslims being systematically murdered and displaced at the hands of the Janjaweed militia backed by the government. The genocide killed 400,000 people and forced 2,500,000 out of their homes. According to the reports, five thousand Muslims die every month.[iii]

What about the rest of the world? Even Muslims in the so-called civilized world don’t get to be treated the same as people of other faiths. Even in Europe and the USA, they have to endure shocking amounts of injustice and discrimination.

For instance, to the complete shock of the world, thousands of war-stricken Syrians that had to leave their country for a semblance of safety and dignity saw outrageous mistreatment and rejection by world’s top economies. After all, relatively poor countries like Turkey and Jordan did extensively well and welcomed more than three million Syrian refugees in their homes. But some of the European countries, despite their richness and the emptiness of their lands, had no problem vehemently denying them a humane response. In countries like Hungary, security forces even beat the refugees up, and fired tear gas and water cannons at them which had children, women and elderly amongst them. It is only because they made the mistake of thinking Europe would offer them kindness.

It is as clear as broad daylight that Europe is perfectly capable of hosting and taking care of all these people that need help. Instead, they abuse them, mistreat them, leave them to death on the high seas, beat them up and compete with each other to keep them out of their countries. The lack of humanity is so deep that a Hungarian camerawoman had no problem kicking and tripping fleeing refugees, including children. The situation became so absurd that the Hungarian PM said, with their firing tear gas at children, he was protecting Europe’s Christian roots and that Europe was in a grip of madness for not being strict with refugees[iv]. He even said that they had to defend their borders as if the refugees were attacking his country, as if he was not talking about poor people that are asking for help while running from imminent death.[v] Slovakia also decided to take in only Christian Syrian refugees.[vi]

Some of the Australian officers, despite the country being a vast continent, and one of the world’s top economies, seem to have an inherent dislike of Muslims and don’t even feel its necessary to hide it. They made it clear that they would prioritize Christian refugees from Syria.

It is hard to wrap one’s mind around all this. It is not a movie script. It is not a part of a sad story. It is also not a scene from Schindler’s List, or The Pianist. If it were, maybe it would have attracted more attention. Most of those who watch those movies with tears in their eyes, expressing shock at the apathy of the world at the time, are somehow able to continue their lives completely unmoved and unaffected by the tragedies that are happening today. Maybe years later, when things relatively calm down, they might even say about all these: ‘Really? How could the world let this happen? Shame on them.’

It doesn’t have to be like that. There might be deeply rooted racism, materialism and selfishness dominating the hearts and minds of many today but there are also people who haven’t lose touch with their humanity, compassion and love. Those people know that discrimination, and racism is immoral, evil and cruel. They are the ones that rush to the aid of refugees coming with trains in Germany, those that offer a shelter in their homes.

And we need more of those people. It is high time that more people wake up and shed the inhumanity covering their hearts. It is time to realize that we are not in this world to get rich or to care about ourselves only. We cannot afford to be swept away by waves of selfishness and lose our humanity. We all have one life and we cannot waste it for the sake of a constant search for self-indulgence. We are here to love and to be loved. We are all the servants of God. Muslim or not, we are all human beings and we have a duty towards each other, to protect and respect each other. It is a huge part of what makes us humans: Being able to empathize, care, help, and self-sacrifice.

It is time to search and unearth the love and compassion hidden in all of us. We might have different colors, faiths, languages but we are all people. We are all sisters and brothers as the descendants of Adam and Eve and we all are created for love. It is time to take responsibility and to act with reason and maturity. We can overcome our differences and start to love each other. We are capable of helping others even if they are different than us. Love will give rise to love and will solve the problems.

Let’s take that step today and start the rest of our lives as new people: As people of compassion and love.