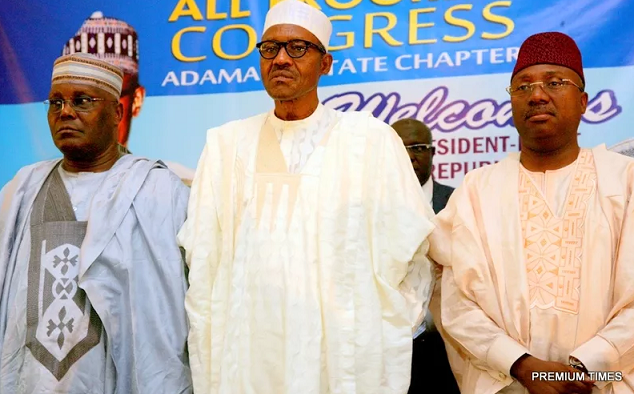 The newly-elected Governor of Adamawa state, Jibrila Bindow, has declared that he rode on the back of the ousted former governor, Murtala Nyako, to win the April 11 governorship election.

Mr. Bindow, who spoke to reporters briefly at the end of a meeting with Mr. Nyako’s loyalists, applauded the former governor for giving him a platform to contest.

The Nyako faction’s meeting with Mr. Bindow followed another meeting he had with the All Progressives Congress executives where former Vice President, Atiku Abubakar, was applauded for Mr. Bindow’s victory.

Mr. Bindow debunked speculations that the party in the state has been polarized into Nyako and Atiku camps due to power tussle.

“There is no faction within the APC,” Mr. Bindow said. “We are one people and there is no difference between Atiku and Nyako. I am an Nyako man.”

A chieftain of the APC, Mijinyawa Kugama, at whose home the meeting held, told reporters that those who did not work for the APC gubernatorial candidate will not be considered in the scheme of things.

Mr. Kugama, a former state chairman of the Peoples Democratic Party, explained that it was Mr. Nyako’s people that worked for Mr. Bindow’s victory right from the primary to the final contest where he emerged victorious as the state’s governor-elect.

“Everybody knows that it was Nyako people that worked for Bindow from the first primary to the second primary of the party up to the general election,” he said. “God has vindicated Nyako and we won all the three senatorial seats, six House of Representatives seats out of eight and 22 state assembly seats out of the 25 in the state.”

Mr. Kugama said those befriending Mr. Bindow following his victory are allowed to do so but that they should realize that Mr. Nyako’s supporters had already finished the job by making Mr. Bindow governor.

Mr. Kugama also pointed out that it was only five of the 32 state working committee of the party that supported Mr. Bindow during the campaigns but that after the victory, the rest rushed to cash in on it.

“Everybody is free to come but the fact remains that at the appropriate time everybody will be placed in his (their) right position(s),” he said. “You can’t reap where you don’t sow.”