NewsRescue- A video was posted in January on Youtube of a very strange snakelike creature with human-like features, hair and upper body and snake tail, supposedly found in Bui Dam in Brong Ahafo region of Ghana.

Well it turns out that that video was a fabrication. The same video of the same supposed creature was first posted online as a find in Indonesia way back in January 2011. The video above is the original video from January 7th, 2011 and posted out of Indonesia.

Related: Half Human Half Snake, Mermaid Found in Congo? Err… Join The Line

The dubious people who posted the 1 year old recycled video, adjoined this commentary on youtube:

This creature is reported to have been captured at Bui by engineers working on the dam. They say a number of efforts to construct the bridge failed because it’d collapse the day after; hence, they increased vigilance leading to the capture. Hmmm. [Youtube]

Ghanaweb, a popular online editorial described that this ‘really happened’, even going to extent of writing that the ‘same monster was said to have appeared in Togo and Nigeria, causing alarm among residents.’ They even went as far as describing this recycled- from Indonesia- find as 100 meters long!  Gosh! The length of a football field. The story has spread so much that Bui Dam officials had to officially  deny the ‘Maame water’, ‘mermaid’ find tales.

Half Human, Half Snake Girl Found In Hotel Room In Warri?

We investigated further and found that the same images from Indonesia had been propagated earlier, around 17th February in the Nigerian online media, primarily stemming from Naijapals.com a popular forum. The fabricated story which takes its roots from Naijapals claimed a hotel lady had mysteriously transformed into this half snake creature. Naijapals handle, ‘Phat_Angel_Roa‘ who posted this fabricated story of the recycled creature on Naijapals, also posted the ridiculous claims below:

Apparently, a girl has changed into a big snake at the Hotel Excel in Warri today. Half part Human and the other half a snake. And apparently the hotel is crowded at the moment with people who want to get a closer look at the creature. It is also said that officer of the Nigerian Military, SSS and the Police force are presently at the hotel right now to search for the unusual creature.

Many other ‘credible’ Nigerian news and information platforms carried the fantastic tale, which has now been revised, revitalized and found its way to Ghana.

The danger of the internet can not be over emphasized. In our story earlier this February, we ‘caught’ a popular online Nigerian website, OnlineNigeria engaged apparently purposefully in recycling propaganda video to provoke unrest in Nigeria. In that story, a video of a beheading that occurred in far away Somalia, three years earlier was recycled and posted as having occurred this year in North Nigeria.

The fabricated story of recycled news garnered up to 200 angry responses on OnlineNigeria and certainly left a permanent and contagious feeling of resentment and distrust, that invigorates the vicious cycle of ethnic, religious and tribal sentiment and death in Africa. There is great power and as great danger in today’s internet.

In both stories we do not even get into ascertaining whether the videos are real or fake, before already finding so many problems and dishonest manipulations. Sometimes these are done for cheap publicity and sometimes for more sinister motives. Always ‘rescue’ your news. 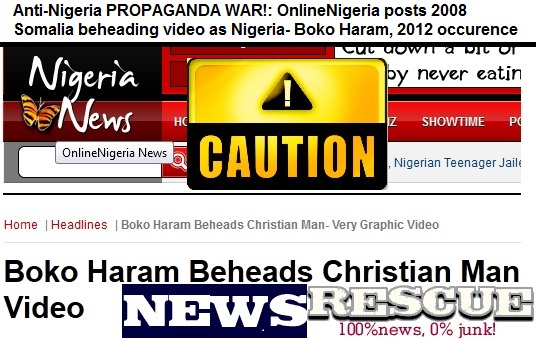 More on the ‘Jenglot’, found in Indonesia.

The Jenglot, with human head and snake body scared people in  Bojonegoro District. According to the reports on it, the mermaid-like thing was first found by an old man near the river beside his house. The Jenglot’s  body measures around 18 centimeters to 20 centimeters. It’s facial features include two white eyebrows, with glaring eyes, and two canine teeth. It’s total length from tail  to head is about 90 centimeters and it has claws. According to Indonesian news sources, several of these have been found, usually by ‘native doctors’, some have been recognized to be fabrications- monkey, fish and snake combinations- and others have not been examined to determine their authenticity.