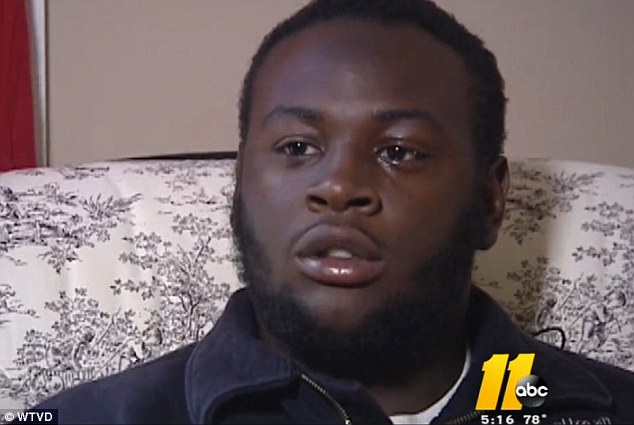 By ASSOCIATED PRESS and MAILONLINE REPORTER

Police officers pepper sprayed a black teenager in his white foster parents’ home after they mistook him for a burglar, authorities have said.

Cops responded to the home in Fuquay-Varina, North Carolina after a neighbor saw 18-year-old DeShawn Currie entering his family’s home through an unlocked side door.

The teenager, who moved in with the Tyler family a year ago, said he was stunned when three police officers entered the home and demanded to know who he was. Hurt: DeShawn Currie, 18, said police officers profiled him when they thought he was a burglar in his white foster parents’ house. He said he became angry when they told him he wasn’t part of the family

The police officers demanded his ID – which showed a different address – and refused to believe he was part of the family because he was not in any of the pictures on the mantelpiece in the home.

Police said they used pepper spray on the teenager when he ‘became profane, threatening and belligerent’ and ‘refused to follow instructions’ from officers.

Stacy Tyler, DeShawn’s foster mother, arrived back home to find the police officers there and told them that the teenager was her foster son.

Mrs Tyler and her husband, Ricky Tyler, have three other young children.

‘He’s my baby boy just as much as my other three children are,’ Stacy told WTVD of DeShawn. Saddened: His foster parents, Ricky and Stacy Tyler, said they thought of DeShawn as their own son