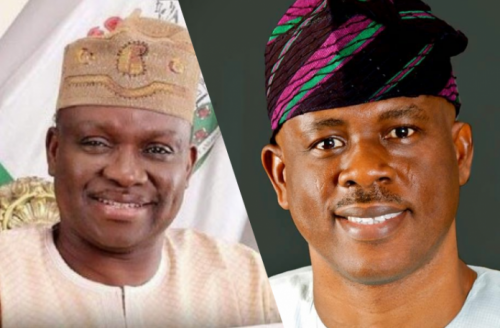 Barely 24 hours after his detention, former Minister of State for Defence, Sen. Musiliu Obanikoro has implicated Governor Ayodele Fayose in the N4.745billion wired to a company linked to him by the Office of the National Security Adviser(ONSA).

The said cash was wired into the company, Sylva Mcnamara within seven months in 2014.

He said N2.23billion was transferred to Fayose out of the slush funds.

He said out of the sum, he handed over $5,377,000 to Fayose in cash and N1.3billion was received by the governor’s associate, Mr. Abiodun Agbele.

He admitted that the N1.3billion was flown to Akure airport in two chartered flights for delivery to Agbele.

The money was sourced from $2.1billion meant for arms from the Office of the National Security (ONSA).

Obanikoro, who opened up to EFCC detectives however said he is not the owner of Sylva Mcnamara that was used to transfer the funds to Fayose.

But he defended why the money was remitted to Mcnamara including the warding off of a plot by Boko Haram to attack Lagos.

Accompanied by his lawyer, Mr. James Onoja(SAN), the ex-Minister was confronted with a petition from ONSA which was dated November 28, 2015.

The petition was titled “Payment to companies with no contract awards or approval.”

A top source quoted Obanikoro as saying that “the sum of N2.2billion was transferred to Sylva Mcnamara for onward transfer to Mr. Ayodele Fayose on the instruction of the NSA.

“The sum of N1.3billion cash was brought in a bullion van by Diamond Bank on the instruction of the NSA.

“In addition, the sum of N60million was converted to dollars at the rate of N168 per dollar and altogether the sum of $5,377,000 was handed over in cash by me to Mr. Fayose while the N1.3billion was received by Mr. Fayose’s associate, Mr. Abiodun Agbele in the presence of my Aide-de-Camp (ADC), Lt. Adewale who also accompanied them to the bank along with the bank officials.

“I didn’t interact with the bank officials. I called Fayose before the funds were handed over to Mr. Abiodun Agbele. I spoke to Fayose with my phone at Akure airport.”

On how the cash was transferred to Fayose, the source Obanikoro told investigators that “two flights were used to convey the money from Lagos.

The ex-Minister said he “took off with the first flight with part of the money while the second flight brought the remaining funds to Akure local airport and I directed that it should be handed over to the same person.”

The source said Obanikoro however maintained that part of the cash was used to ward off Boko Haram aggression in Lagos and in the South-West in general.

The source added: “He told us that he is not the owner of the company in question but introduced the owner, Mr. Kareem Taiwo to the NSA, Mr. Sambo Dasuki when the threat of Boko Haram became more visible in Lagos.

“He said the government wanted to “incorporate local input into the intelligence gathering and prevention of terrorist attack on Lagos and the South-West in general.”

The EFCC had discovered that Sylvan Mcnamara Limited, allegedly owned by Obanikoro and his sons, was used to launder the N4.745billion.

The company, which was incorporated in November 2011 had the following as its directors: a close aide of the ex-Minister, Ikenna Ezekwe(700,000 shares) of 51 Simpson Street, Ebute-Metta; Idowu Oshodi(299,000 shares) of 8, Prince Tayo Adesanya Street, Park View Estate, Ikoyi; and Elizabeth Adebiyi(1,000 shares) of 3, Adedoyin Street, Ijeshatedo, Surulere.

But Ikenna Ezekwe has had his accounts de-frozen by the EFCC since the slush funds were not traced to him.

A document said: “To set the stage for the use of the company for money laundering, the board of directors on May 7, 2012 passed a resolution that the company should open an account and appointed Mr. Gbolahan Obanikoro, Ikenna Ezekwe, Ms. Theresa Matuluko (Secretary) and Mr. Babajide Obanikoro as the signatories to the account.

“The board added that the signing combination be that any of the signatories can sign alone.”

According to EFCC, when it was time to illegally draw the N4.745billion from ONSA as war chest for Ekiti Governorship poll, ex-Minister Obanikoro made the account of Sylvan Mcnamara Limited available and coordinated the disbursement.

The breakdown of the disbursement was as follows: N N759, 384, 300 changed into dollars through Bureau De Change firms; N160million used to purchase cars through Balmoral International Limited; N1, 219, 490,000 ferried by Obanikoro in two flights to a branch of Zenith Bank at Plot 13, Alagbaka Estate, Akure to evacuate the cash and received by Fayose’s associate, Abiodun; balance of about N2billion withdrawn by Obanikoro and his two children in cash.