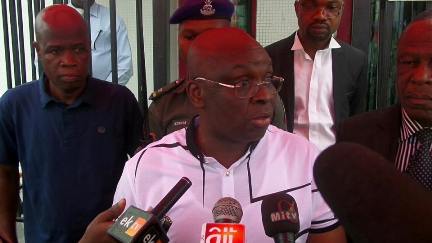 Facts are at last coming out of how Governor Ayodele Fayose allegedly helped himself with Ekiti State money and kept it in the accounts of trusted cronies after putting them on oath.

According to reports from The Monitors, Fayose stole from many sources in a heartless raid on Ekiti State resources to amass wealth for private comfort while deliberately refusing to pay workers’ salaries for five months, even though he received allocations for the same period, including collecting N9.6b bailout, Ecological Fund, CBN loan on SMEs, refunds on
federal roads, charges on banks for community social responsibility and various suffocating taxes that Fayose kept in accounts that are unknown to government’s financial system.

Impeccable sources quoted by The Newspaper revealed that a multiple tracking of Fayose’s assets was conducted by security and anti- corruption agencies that came with a damning revelation of a massive looting of Ekiti State.

Just as Nigerians were waiting to see what would happen to him as alleged in his press conference, Fayose got the shock of his life yesterday afternoon when he learnt that his account with Zenith Banki had been frozen by the EFCC. He ran berserk after learning that the EFCC had frozen his account.

One hour after EFCC froze his Account, Fayose stormed Zenith Bank, refusing to leave the
bank until he was paid. It was gathered that Fayose first sent one of his aides to the bank to withdraw some amount of money but the cheque was not honoured. Sensing danger,

Fayose hurried to the bank with his full entourage only to be told that he could not withdraw a dime from his account as it had been frozen.

Fayose, according to reports, went into a frenzy, threatening fire and brimstone but the bank officials were helpless and told him they couldn’t do anything to help as the order to freeze was beyond them.

He immediately addressed a press conference at the bank premises calling President Muhammad Buhari unprintable names and shouting that the EFCC acted illegally by
freezing his account as a sitting governor who enjoys immunity.

SKYTREND NEWS gathered that about N4billion was found in Fayose’s personal account while that of his son, Rogba Fayose, contains about N200 million; all frozen.

It was gathered that Fayose kept his loot in the accounts of cronies after putting them on oath. For instance, Fayose allegedly kept N500m in the account of one Jumoke, a waiter at his Spotless Hotel, Ado- Ekiti. He was also said to have kept N2billion in the account of his friend called Abbeys while his former Commissioner for Finance, Kayode Oso went away
with Fayose’s N500m when both deceived Ekiti people that the
commissioner resigned over health challenges.

The Monitors reports that Oso is now back, feigning ill-health and walking on crutches allegedly to deceive Ekiti people that he was actually sick.

Besides cash traced to Fayose, his multi- billion naira hotel in Dubai has been reportedly discovered by the EFCC. According to sources quoted by The Monitors, one of his backers who facilitated his election but who he later allegedly defrauded was instrumental to the Dubai hotel discovery and reported to EFCC.

This Is Developing Story. Stay Tuned With SKYTREND NEWS For More Details.