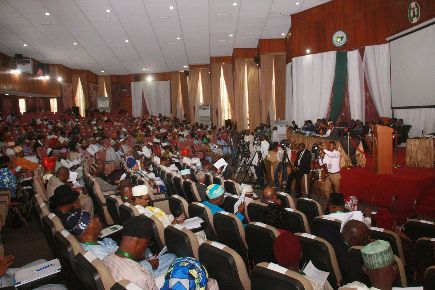 It was a happy end to an uncertain journey on Thursday when the plenary session and indeed the 2014 National Conference drew to a close amidst fanfare laced with solidarity songs. Suddenly, media hypes regarding apprehensions arising from issues contained in the three volumes of the prepared reports melted into oblivion as delegates unanimously approved the reports. A scenario of unsolicited hugs, multiple pats on the back, wide smiles, handshakes unhindered by ethnic divides unfolded naturally as the unanimous adoption of the reports was taken. Conference Chairman and former Chief Justice of Nigeria, Justice Idris Legbo Kutigi, GCON; Deputy chairman and former Minister of Foreign Affairs, Professor Bolaji Akinyemi; Conference Secretary, Dr (Mrs) Valerie-Jenette Azinge and the three assistant secretaries savoured the atmosphere with joy. Shortly after the adoption of Votes and Proceedings of the previous day, the session opened with a “motion to mandate the secretariat to vet and effect amendment” to the three reports prepared by the secretariat. Here is the full text of the motion sponsored by High Chief Jerry Okwuonu and former governor of Rivers State, Dr. Peter Odili: “Whereas the secretariat has done a very marvelous job of compiling the report of the Conference and presenting same to us in easily readable and cross-checkable format; and “Whereas delegates have perused all the reports and submitted in writing all items of omission or incorrect addition to the final report; and Bearing in mind the dual necessity of bringing the conference to a close for purposes of not unduly over-reaching the logistics provision of the conference and not unnecessarily prolonging the continued conglomeration of people in contradiction to the prescription of Health Authorities especially as the country tackles the Ebola crisis. “It is hereby moved that the secretariat be mandated to vet all the written submission by delegates and make necessary correction thereby providing the final draft of the Conference reports” Another motion to slightly amend the earlier motion was taken for a change in the nomenclature of one of the volumes of the reports from Draft Constitution to Proposed Amendments to the 1999 Constitution was moved by another delegate Adamu Maina Waziri. Here is a full text of his motion: “To cultivate a conducive environment for delegates to validate and adopt the final report of the Conference, we the undersigned delegates, hereby offer and endorse the following observations and recommendation that seek to facilitate the process and lead to amicable ending of the Conference proceedings.            “We note that the Secretariat of the Conference on August 11, 2014 tabled before delegates a draft report contained in three volumes that are broken down in seven chapters “In particular, we observed that volume III titled Draft Constitution, conveys an attempt to insert various resolutions and recommendations of a constitutional nature that were adopted by the Conference as proposed amendments to the appropriate sections of the Constitution of the Federal Republic of Nigeria, 1999.  “We recall and welcome the clarification and confirmation offered by Conference Chairman at plenary on August 13, 2014 that indeed Volume III contains proposals for the amendment of the 1999 Constitution. “We urged the leadership of the Conference, in collating the final report, to more appropriately designate Volume 111 as: Draft Proposals to Amend the Constitution of the Federal Republic of Nigeria, 1999. “Furthermore, we note and welcome the amenability of the Conference Secretariat to entertain suggestions from the delegates that point out any specific error to misrepresentation of decisions taken or resolutions adopted by the Conference and/or any inadvertent failure to incorporate same in the draft report. “We are aware that delegates have responded to this call and submitted to the Secretariat their various observations and suggested amendments to the draft. “In preparing the final report, we urged the Conference Secretariat to keep faith with and reflect fully and accurately all resolutions and recommendations accepted by the Conference and as contained in votes and preceding that were formally adopted. “Subject to the acceptance of the foregoing understanding, assurances and conditions and in accordance with the Procedure Rules, 2014 of the Conference, we move for the validation and adoption of the draft reports contained in volume 1,2 and 3 without further debate. “In the spirit of the consensus building cultivated by members and to maintain the bridges built during the currency of the Conference, we urge all delegates to subscribe to this plea.” The two motions when put to voice vote separately by the Chairman received a unanimous acceptance by the delegates. Spontaneously, all the delegates stood up and enthusiastically sang the old National Anthem “Nigeria We Hail Thee”. The chairman then called on Chief Richard Akinjide to formally move a motion for the adoption of the final Conference Report. Chief Akinjide while moving the motion recalled his days in parliament before Nigeria gained independence and also after independence and noted that it was an honour to be called upon to move a motion for the adoption of the final report of a “very successful conference”. The youngest delegate to the Conference, 24-year old Miss Yadoma Bukar Mandara, seconded the motion. Shortly after, delgates took turns to pour encomium on the leadership of the Conference for their maturity in steering the conference proceedings. Former governor of Akwa Ibom State, Obong Victor Attah gave a very moving vote of thanks which received spontaneous applause from delegates. A delegate representing the South South, Hon. Orok Otu Duke, read out a farewell poem titled “How Can We Say Farewell” to the delegates. After adoption of Votes and Proceedings for the day based on a motion by Iyom Josephine Anenih and seconded by Dr. Bello Haliru Mohammed, Justice Kutigi called on the Lamido Adamawa, Alhaji Mohammed Mustapha to move a motion for the closure of the Conference. Chief Mike Ahamba who seconded the motion said Thursday was a day of pride and honour because “when we came here, nobody expected us to end this way…We have disappointed the skeptics.” With that comment, the 2014 National Conference inaugurated by President Goodluck Jonathan on March 17, 2014 came to a close. SIGNED AKPANDEM JAMESASSISTANT SECRETARY, MEDIA AND COMMUNICATIONS