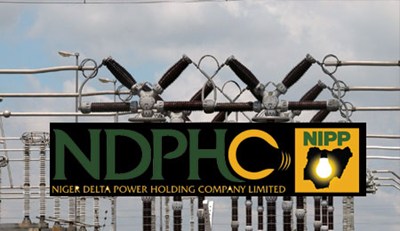 The Niger Delta Power Holding Company (NDPHC) board has advised the
general public to disregard reports insinuating that the board was
making spirited attempts to make hurried appointments ahead of May 29
for a promised seamless handover by the present administration.
This was contained in a statement issued and signed by Mr Yakubu
Lawal, General Manager, Communications and Public Relations of the
company.

Lawal in a statement said that the board drew the attention of the
public to an editorial commentary in one of the National Dailies
(Leadership newspaper) of 24th April 2015 insinuating that the board
of directors of NDPHC was making spirited attempts to make some
hurried appointments ahead of May 29th.

He said that it is instructive for the records to be straightened so
that discerning members of the public will not be swayed by the
apparent falsehood and inaccuracy of such news reporting ended to cast
aspersions on the integrity, credibility and competence of the
chairman and members of the board of the NDPHC over the exercise of
its statutory functions.

According to him, it is no gainsaying the fact that the Board of
Directors of NDPHC owners of the National Integrated Power Projects
(NIPP) has positioned the company to effectively pursue its Phase II
project mandate aimed at implementing more hydropower stations and
transmission projects in the country to give the power sector
infrastructure a more robust synergy.

It will recall that at its recent meeting in Abuja, the board
approved the implementation of a new structure proposed at the
company’s board meeting in August 2014.

For the records, NDPHC is a registered limited liability company owned
by the three tiers of Nigerian government (Federal, State and Local)
with a board (representing its shareholders) as its highest policy and
decision making organ that drive the operations of the company.
Lawal said that the board reposes the highest confidence in the
sterling qualities of Mr James Abiodun Olotu, the
Managing-Director/CEO as head of the structure and arising from his
unparalleled performance through thick and thin under the phase 1
program to lead a new team of seasoned professionals selected from the
various geopolitical zones across the country to manage the challenges
of the next phase of the NIPP programme and to deliver same on budget
and in good time.

“Under the new structure, the company now has four executive
directors responsible for Generation, Networks, Finance and Accounts
as well as Corporate Services while the office of the Company
Secretary and Legal Adviser is also upgraded to director’s status.

“These appointments were approved by the Board as one of its statutory powers.

“The Corporate Affairs Commission (CAC), its rules fall under the
Companies and Allied Matters Act (CAMA).

“The tenure of her Directors is dependent on their individual and
collective performance as determined by both or either her Board or
her shareholders at its Annual General Meetings,’’ the statement
added.

Lawal said that the MD/CEO has therefore been given a clean slate to
move the programme forward.

As one of the main resolutions of the National Economic Council (NEC)
which comprises all the stakeholders at its meeting held in April
2013, the council approved the second phase of the NIPP projects to
include execution of Mambilla hydro power project and 16 identified
medium and small hydro power projects.

He said that this will create a mix power generation/supply system for
the country by balancing the Phase 1 NIPP projects where 10 new
thermal power stations located in the southern parts of the country
were constructed.

Lawal added that the second phase will contribute about 4,000MW into
the national grid.

The board had also approved the Phase two critical transmission
projects which shall wheel power from the existing and new power
stations having capacity of over 20,000 megawatts to the distribution
chain across the country on completion.

“These projects are currently being assembled,’’ Lawal said.
According to the statement, the Status Report presented to the board,
four fully-completed power stations  has been commissioned by
President Jonathan.

They were listed to include, Geregu II, 434mw capacity in Kogi state,
Omotosho II, 500 MW capacity in Ondo state, 750MW capacity Olorunsogo
II power plant in Ogun state and Phase One 504MW Alaoji thermal power
station in Abia state while Benin Generation Company and Ogorode both
of 450MW capacity each in Edo and Delta states respectively are
waiting official commissioning.

“Also ready for commissioning is 500MW Calabar Power station in Cross
River state while the Power plants in Gbarain ,Bayelsa state, Omoku
power station in Rivers state and Egbema power station in Imo state
are at various stages of completion.

“The completion of 13km 132kv DC Adiabo – Calabar 132/33kV
sub-station and reinforcement of this Calabar 132/33kV Substation with
1no 60MVA 132/33kV Transformer and bays to accommodate new lines from
Adiabo.

“The completion of comprehensive upgrading of Jos 330/132/33kV
Substation with 1no 150MVA Transformer, 1No 75MVAR Reactor and new 330
and 132kV Bays provision to  accommodate new lines in and out of Jos
330kV substation.

Others are the completion of 286Kms 330kv DC Jos-Makurdi transmission line.
Completion of the new Makurdi 330/132/33kv substation.

Completion of a 222kms 330kV DC transmission line from Geregu through
Lokoja to Gwagwalada, linking our NIPP power plant at Geregu to FCT.
Commissioning of a 2x150MVA 330/132/33kV transformer substation at
Gwagwalada in the FCT with a further 90kms of both 330kV and 132kV
lines to interface with Katampe and Apo 330/132/33kV substations in
the FCT.

Completion of the 2x300MVA 330/132/33kV transformer Substation at
Oke-Aro in Lagos which is now the largest 330/132kV transformer
substation in the grid.

Completion of a new 150MVA 330/132/33kV substation at Asaba in Delta State.
Comprehensive upgrade and reinforcement of New Haven 330/132/33kV
Substation with several new bays to enable the station cope with new
incoming 330 and 132kV lines.

Completion of Ugwuaji 330kV substation in Enugu North with a 7Kms DC
330kV line linking it to New Haven.

The completion of 265 out of 296 Distribution injection substations nationwide.
Also installation of 13,367 Distribution CSP transformers out of
22,000 across the country.

The Minister of Power Professor Chinedu Nebo during the press briefing
after the board meeting stated that national generation level stood at
5,500MW out of which NIPP contribution is about 2,600MW.

He said that these and more are feats worthy of commendation and not
for the board and management to be maligned.

According to him, these achievements are recorded first in Nigeria and
indeed Africa next to Escom of South Africa.

He said that based on the foregoing, it has therefore become necessary
for the Management of the Niger Delta Power Holding Company (NDPHC) to
dispel such unfounded and unwarranted report aimed at spreading
mischief and falsehood.