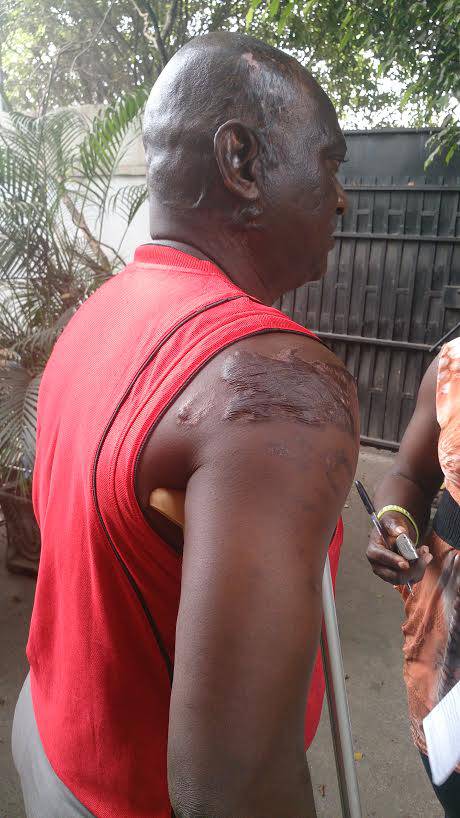 The victim of a ghastly Jan. 2014 road accident involving a Dangote Cement truck has reached out to Sahara Reporters today, condemning reported neglect on behalf of the company with regard to his worsening health.

John Arole Kalesanwo, the victim, told Sahara Reporters that he was traveling from Ibadan on Jan. 4, 2014 in his Opel Astra vehicle. Around 8:00 p.m., he says he sped unsuspectingly into a broken down truck on the road. Kalesanwo said there were no cautionary signs made for the disabled vehicle, which was left on the roadside.

Other vehicles also ran into the same truck, sustaining injuries. Another man, Rasaq Lawal collided with the same truck on Dec. 23, 2013.

The Divisional Police Station at Awa-Ijebu has since impounded the truck, after several reports of accidents, but all efforts by victims to reach the company were fruitless.

A police report found that all accidents caused on the scene would have been averted if cautionary signs were displayed for oncoming vehicles, because the truck was abandoned. The driver of the vehicle had also absconded and could not be found.

Kalesanwo said he was rendered unconscious on the first two days following the accident and was later transferred from State Hospital to Olabisi Onabanjo University Teaching Hospital where he was treated.

The vehicle following the accidentSahara Reporters MediaDoctors said he would need to travel abroad for proper surgical treatment, as he had suffered multiple rib fractures at his acetabulum, implying that his hipbone is completely shattered. In addition to his broken bones, Kalesanwo has lost the ability to walk, and sustained lacerations and burns from head to shoulder. His car was also damaged completely.

A civil society group, the Civil Liberties Organization (CLO), said it had made several attempts on behalf of the victim to reach out to the Dangote Cement company, but that the General Manager, identified as Alhaji Biliaminu, had claimed that the company would not respond to any case of accident that is older than six months.

Speaking about the incident on Thursday, the Civil Liberties Organization claimed that the victim would require up to N50 million to undergo proper surgery and return to normal life.

Biliaminu said he was aware of the case and investigation by police, though provided little further detail.