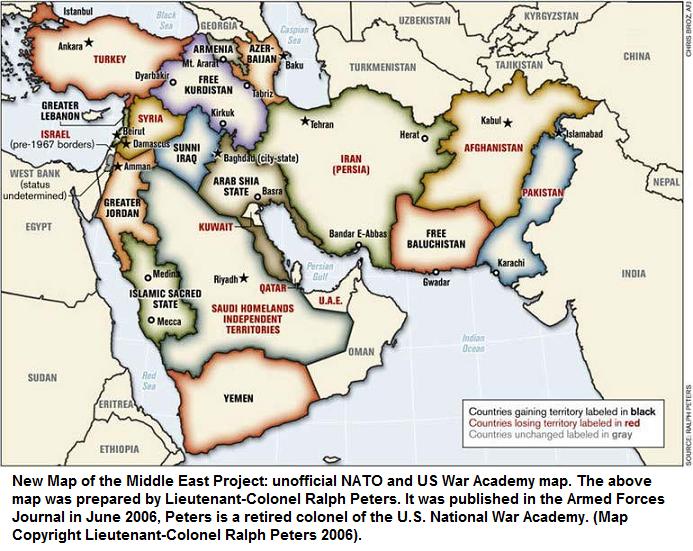 Is Iraq being suddenly invaded by waves of “terrorists”? Or Iraq been deliberately sabotaged, sacrificed, and destroyed?

The mainstream corporate media portrays it as a “terrorist insurgency”of Sunni “extremists” that has, seemingly overnight, overtaken the country. The Obama administration is depicted as having been “caught off guard”. If Iraq is lost, according to these narratives, then all of America’s “gains” will be “squandered”.

In fact, what is engulfing the region is a massive CIA operation, a geostrategic plan long in the making: drown the region in sectarian war, a gigantic regional bloodbath, with multiple destabilizations and deliberate stoking of sectarian violence across multiple borders, to completely redraw the map of the Middle East and Central Asia, and beyond.

The US is playing all sides of this exploding conflict, towards larger US/NATO objectives.

Evidence strongly points to a deliberate retreat by US and Iraqi forces that allowed the ISIS to take Mosul, Tikrit, Fallujah, and furthermore allowed them to take American weapons and equipment that were “magically” left for them in large supply.ISIS has now taken control of the Baji oil refinery north of Baghdad, giving them a source of fuel and a potentially lucrative source of income. The Sunnis, including Saddam Hussein loyalists, are “back”.

In horrifically surreal fashion, the coming military spectacle could pit US military forces using drones and air strikes on behalf of the al-Malaki Shi’ite regime against the CIA’s own ISIS Sunni forces possessing US weapons and equipment. Destruction and lies will leave millions of Iraqis dead, the country devastated.

Iraq is being re-invaded and re-destroyed, to be transformed into something along the lines of the original Bush/Cheney plan, which called for it to be partitioned along sectarian lines, leaving key oil and gas production in the South in the hands of Western-allied corporations. The plan has never been for a stable Iraq, but a malleable one. Merely a step towards something bigger.

Having previously failed at toppling Damascus with an Al-Qaeda “freedom fighting” insurgency,the CIA’s is redirecting and redeploying its proxies. The ISIS is now greatly strengthened and better armed. It enjoys logistical advantages from bases in both Syria and newly captured Iraqi territory. It is now situated to surround and exert pressure on both Syria and Iran.

The familiar pattern: The “restoration of order” in newly opened territory comes next,either militarily or under the guise of humanitarian assistance. Puppet regimes are installed. Corporations, under the guise of “rebuilding” and “investment”, taking control of, among other things, oil and gas, and more importantly geography used for bases— from which to launch future military-intelligence operations.

Events in Iraq could mark the beginning of a much wider apocalypse. According to Michel Chossudovsky, the longstanding US agenda is to carve up both Iraq and Syria into three separate territories: a Sunni Islamist Caliphate, an Arab Shia Republic, and a Republic of Kurdistan. Iraq will be eliminated as a country entirely. The entire region is threatened.

Within US borders, brain dead disinterest reigns. The vast majority of Americans does not know, and do not care what is unfolding. The average citizen may react tosocial issues such as marriage equality or racism in sports (which the powers that be consider minor and unimportant), but remains oblivious about larger threats to all of humanity, including them, and war that continues to use American lives as cannon fodder. The American masses have not awakened, no matter what facts have been amply exposed.The propaganda narrative of the 9/11 false flag operation is firmly implanted, perhaps eternally: America is at war against “the terrorists who attacked us on 9/11” and “we have to defend freedom”.

The political left (co-opted in large part by COINTELPRO-style activities) chases its own tail, accepting the consensus narratives out of Washington, occasionally fretting about limited views such as “blowback”,  eager to believe in Washington’s “bumbling innocence”, swallowing virtually all of the red herrings easily.

In corrupt Washington, the scene is beyond Orwellian. Propaganda and lies are the order of the day. The inner circle is aware of what is transpiring, but partisan bickering and grandstanding persist. The corporate media refuses to report facts, and repeats tired propaganda. The “war on terrorism” is alive and well.

Senator Dianne Feinstein is warning of “devastating consequences” of “Sunni forces on the march” without mentioning the fact that the US is behind it. She is calling for “both sides (Democrats and Republicans) to come together”.

It is no coincidence that John McCain, a leading figure who openly supports Al-Qaeda terrorists and clandestine atrocities, is front and center once again. He is now spewing blasts of spitting anger over the administration’s “bungling” of Iraq:

“Everybody in his (Obama’s) national security team, including the chairman of the Joint Chiefs of Staff, ought to be replaced. It’s a colossal failure.”

McCain is calling for immediate military attacks (while probably applauding the Obama administration’s actual activities). This is the same McCain who is directly involved in arming Al-Qaeda terrorists in Libya and Syria.  There is little doubt that McCain, who cannot get enough of the CIA’s Al-Qaeda “freedom fighters”, also approves of ISIS.

McCain with leaders of Al Qaeda and the Free Syrian Army

McCain’s good friend and fellow war monger, Senator Lindsey Graham (R-SC) also wants immediate air strikes and is pushing the idea that the “next 9/11 is in the making”.

What of Obama? Now that he is a lame duck president, with no more re-election politics and image fakery to worry about, Obama and his national security apparatus seems to be moving on two fronts, one real, the other propaganda. The administration is pushing Ukraine/Syria/Iraq/Iran aggression on a new scale, going for broke to meet long-held goals (the realpolitik), while sacrificing itself politically (the propaganda narrative).

Politically, is Obama “falling on the sword”? In appearance, like every president before him, Obama is being ushered out as a foreign policy failure in his final years, in order to pave the way for his successor. If he fails to “restore order”, Obama will go out as the man who “lost Iraq”, “left Iraq too soon”, failed to stop terrorists, failed to get rid of Assad, failed to get Iran, etc. Obama is being blamed for the “political paralysis” of the Malaki government. The administration, and the likely Democratic nominee for the presidency, former Secretary of State Hillary Clinton, have already been tainted and compromised as the “ones who lost Benghazi” and covered it up.

Regardless of the fact that Obama has improved upon the murderous Anglo-American geostrategy that Bush/Cheney began (Obama hasexponentially ratcheted up aggression while still maintaining a broadly appealing political cover), a rightward shift—back towards Bush/Cheney—in America may be next; the same kind of “disaffection-fueled” right-wing fascism that is sweeping Europe, and exemplified by neo-Nazi Ukraine.

A more openly brutal White House occupant will be needed for the next stage of world war, and control over dissent within US borders.

Someone like Jeb Bush, with a cabinet of former Bush/Cheney Republican war criminals crawling back out of the woodwork.

Threat to the future of humanity

The American empire continues to wage total war, using all means necessary, to take and control the Eurasian subcontinent, all the way to Russia and China.

This holocaust is of a scope and scale beyond comprehension. Events in Iraq, Syria and Iran go hand in hand with events in Ukraine, towards a single desperate global agenda. At stake is control of the world’s remaining oil and gas, pipelines and energy transport routes as the planet lurches towards depletion in a few decades.

The world hurtles towards the brink of nuclear holocaust.

Unfolding events in Iraq are not the result of “intelligence failures” but, like 9/11 and other atrocities, another planned intelligence operation that appears to be succeeding in horrific fashion.