Abba, who was sworn in last week by Kaduna State governor, Nasir Elrufai made the announcement in a statement personally signed by him.

He is perhaps the first and only local government chairman to cut his salary and allowances by half, taking a cue from the state governor who had in the first week of assuming office slashed his salary by 50%.

According to Abba, the decision to slash his salary is a cost cutting measure which has become imperative considering the economic realities of Kudan Local Government Area.

I, Dauda Iliya Abba, interim Chairman of Kudan Local Government in Kaduna State, hereby announce that henceforth my salary and allowances have been cut downward by 50%.

I also appeal to members of my team, particularly the interim councillors to emulate this collective sacrifice as exemplified by our leaders, the President Muhammadu Buhari and our state Governor, Mal. Nasir Ahmad El-Rufai.

This will go a long way in resuscitating our dilapidated infrastructures, as this administration will no longer tolerate wastage and leakages of public funds at the detriment of the overriding interest of the majority that we are here to serve.

In addition, Kudan will lead the way in enhancing transparency in the way the Local Government resources are being spent.

As a first step, we shall be publishing all our proceeds in terms of allocation and other accrued revenues regularly.

In the end, Kaduna will be great again. 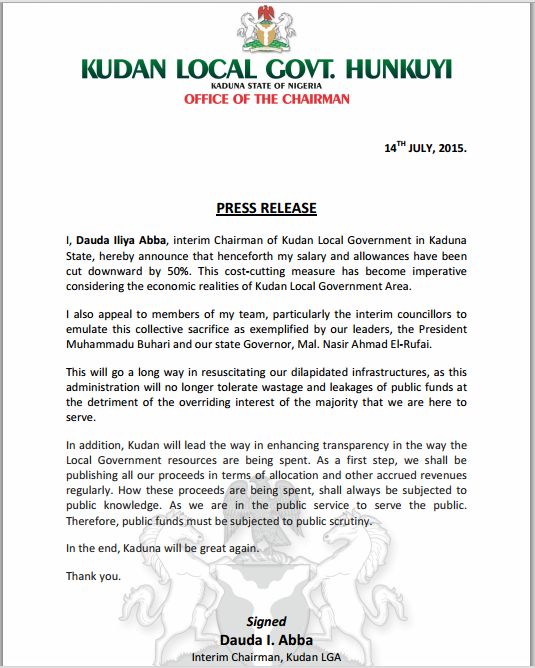