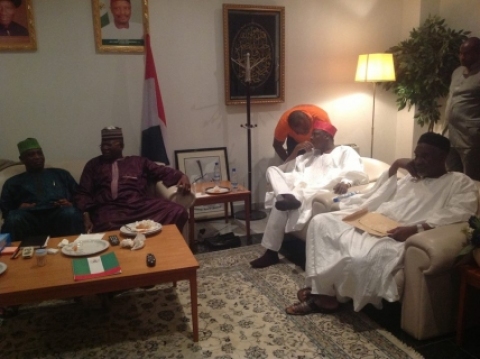 The New Peoples Democratic Party (nPDP) has noted the denial by the Inspector General of Police, Alhaji Mohammed D. Abubakar, who during his appearance before the House of Representatives Committee on Police Affairs probing the disruption of the November 3, 2013 Meeting of the G7 Governors at the Kano State Government Lodge, Asokoro, Abuja, said that the infamous order was not from him.

“I want to state categorically that neither myself nor any of my officers directed anybody to disrupt any meeting, but the officer has a duty to account for his actions and activities within his domain,” the IGP had said.

While we may agreed with the IGP wholeheartedly on his stand and it is not our wish to accuse the IGP of lying, we hereby challenge him to prove his sincerity by instituting a probe into that shameful incident. This is the only way to convince Nigerians that he had no hand in the brazen attempt by the Divisional Police Officer of Asokoro Division, CSP Nnanna Amah, to abruptly and illegally terminate a legitimate gathering of seven of the country’s Governors. CSP Nnanna Amah, who had the temerity to threaten to arrest the G7 Governors if they did not stop the meeting, claimed to be acting on orders from a higher authority from the Villa. Who is that authority in the Villa? Nigerians surely deserve to know.

We hope that IGP Abubakar is not trying to hide behind a finger in this instance. We are just thinking aloud because the IGP cannot claim ignorance of the impunity being perpetrated in Rivers State by the Commissioner of Police, Joseph Mbu, who has continued to be retained in that sensitive office despite requests for his transfer out of the state by the Rivers State Government, the National Assembly and many other eminent groups and individuals. Is the IGP trying to say that he can no longer control people working under him? That is an unsettling thought in view of the grave implications for the maintenance of peace and security in the country.

We trust IGP Abubakar’s competence and integrity but we urge him to sit up and take a stand on the side of truth and justice so as to avoid being seen as a threat to our fledgling democracy. He should remember the type of support that both the G7 Governors and other progressive Nigerians gave him upon his appointment as the nation’s number one cop and stop any further acts of impunity by the police. This is the only way for him to redeem his flagging image and that of the Nigeria Police Force. We sincerely wish him the best as we have continued to pray for him to avoid some misguided politicians from causing him to derail from the expectations of Nigerians.