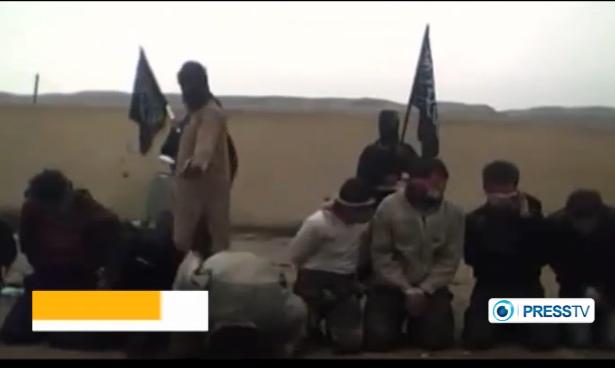 In the video, the terrorist executing the soldiers is speaking with a Saudi accent.

Recently, other footage circulated on the internet showing cannibal terrorist Khalid al-Hamad, also known as Abu Sakkar, cutting out an organ of a Syrian soldier and biting into it. At the time of the filming, Hamad believed that he was eating the man’s liver, but a surgeon who saw the video said the organ was actually a lung.

On May 14, UN High Commissioner for Human Rights Navi Pillay said that the inhuman act was a “truly atrocious act” and that it should be investigated as a war crime.

Turmoil has gripped Syria for over two years, and many people, including large numbers of Syrian soldiers and security personnel, have been killed in the foreign-sponsored militancy.

The Syrian government says that the chaos in the country is being orchestrated from outside, and there are reports that a very large number of the militants are foreign nationals.