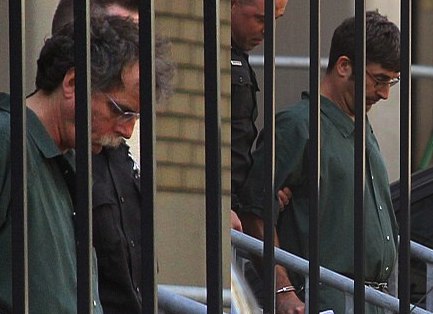 New York (CNN) — Two men have been charged in the Albany, New York, area in a bizarre plan to use a device loosely described as a ray gun to “target people they didn’t like,” a federal law enforcement source with knowledge of the investigation said Wednesday.

Glendon Scott Crawford, 49, and Eric J. Feight, 54, were arrested Tuesday after an undercover operation by the Albany FBI Joint Terrorism Task Force. They were charged with conspiracy to provide material support to terrorists.

The suspects intended to use the device to harm and kill enemies of Israel, a Department of Justice news release said. If convicted, each faces up to 15 years in prison, a $250,000 fine and five years of supervised release.

The suspects, expected to appear in federal court Wednesday, apparently planned to use the homemade X-ray machine to attack high-ranking government officials and other targets with radiation, the source said. Read more

Related: NewsRescue-Over 5 US White Males Caught With Bombs and IED’s Within Month of Boston Bombing

The full complaint against two local men in custody reveals that undercover FBI agents posed as people who claimed to be aiding them in plans to develop an X-ray radiation emitting device to kill targeted people.

It also states that just days ago both 49-year-old Glendon Scott Crawford of Galway and 54-year-old Eric Feight of Hudson had plans to meet at a local hotel to test elements of the device.

“What they were engaged in, in terms of putting this particular device together with its truly deadly capability, that presented a significant danger to the public,” said Executive Assistant US John Duncan.

That danger, according to the lengthy criminal complaint, was fueled by Crawford’s ill feelings towards Muslims.

According to the complaint, when referring to killing Muslims with the device, Crawford said it would be like “Hiroshima on a light switch,” and, “everything with respiration would be dead by the morning.”