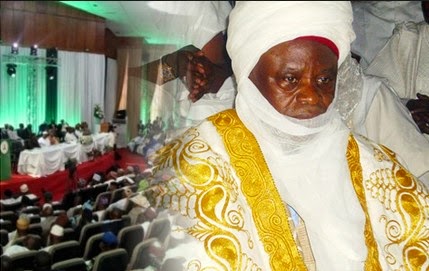 Olufamous-Lamido of Adamawa, Dr. Muhammadu Barkindo Mustapha, again on Tuesday stoked a fresh controversy at the ongoing National Conference when he gave a stringent condition for a 100 per cent resource control. He also kicked against autonomy for ethnic nationalities in Nigeria, saying it would give room for many demands.

In a tacit reference to the people of the Niger-Delta who have been clamouring for resource control, Lamido said they should be ready to lose their lands in the Federal Capital Territory, Abuja.

“That means ownership of land should revert to those states and anybody who wants to use the land or the structures in the land must pay rent to those states or the traditional owners of the land, for example, the FCT.”

But a Rivers-delegate and a former Deputy Speaker of the House of Representatives, Chibudom Nwuche, in his response, dismissed the monarch’s comments, saying they were not realistic issues.

He said, “Is that really an issue? I feel that is his personal opinion and even if it is 100 per cent, the Federal Government will still impose tax to provide common services. There should be room for government to impose tax to provide common services like foreign affairs, common currency and the Federal Road Safety Commission. You cannot subsume this under 100 per cent. Although it could be a good concept, you must give the Federal Government the right to tax.”

The latest controversy is coming about two weeks after the monarch had told the conference that his kingdom extended to Cameroon and he still had his kith and kins there who would receive him and his people if for any reason the North seceded from Nigeria.