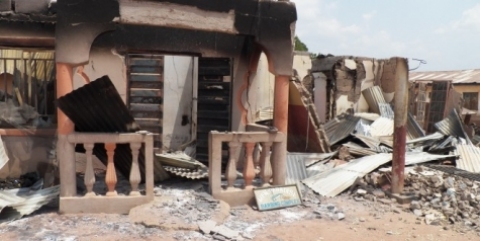 More than 50 people have died today in a violent religious and ethnic conflict that engulfed Taraba State today. A military source who spoke to our reporter added that many more people sustained serious injuries.

Our source disclosed that the ethno-religious fight broke out in Wukari and Ibi towns in Taraba State. “In addition to those who died, over 100 people are badly injured and receiving medical attention in several hospitals in the state,” said the military source.

According to the military officer, “The fight started in Wukari and we were drafted there. While we were there, we received a report that the fight had escalated to Ibi town. Some soldiers were then drafted there and they are carrying out patrols now, but I and a troop of soldiers remain in Wukari.”

The soldier, who disclosed that the fight broke out between Hausa-Fulani Muslims and Jukun Christians, revealed that he and other soldiers had counted more than 50 corpses on both sides of the combatants in addition to more than 100 injured victims.

The military source reported that the warring sides had destroyed and burnt numerous houses and business premises. He stated that hundreds of displaced people had fled the area for safety. He also reported that the combatants used sophisticated weapons in carrying out their attacks. “If we had not arrived in full force to contain the situation, many more people would have died because of the caliber of weapons used in this war,” he said. He assured that the soldiers deployed to the two affected towns would be equal to the task of maintaining peace.

Several Feared Dead In A Renewal of Taraba Violence

Ethno-Religious violence has once again erupted in Wukari, where at least a half dozen residents in the Taraba State region are feared dead in weekend violence. In a story that continues to unfold, SaharaReporters has learned that numerous residents feared killed in the violence, an undetermined amount of property damage has occurred in the town with what some residents in Wukari have called a renewal of ethno-religious tensions.

Lawal Sambo, a resident of Wukari, told a SaharaReporters correspondent, including a reporter at PREMIUM TIMES, that he has taken refuge, including several other local residents, in the bush just outside of town. In addition, Sambo said that trouble began after an armed group of Junkun youth had attacked the Sabon Gari, and the Kantana wards, including the market area. The market area is a district that is populated largely by Hausa speaking residents.

With smoke clouding the sky and fires raging across the small city, Sambo had said, “as we speak, almost the whole of Sabon Gari has been burnt down.” Attacks in the area began just after dawn, beginning, some residents said at around 7:30 am Sunday morning.

Suleiman Adam, another Wukari resident who spoke on the record, had said that “no one is sure” what touched-off this latest round of violence. Adam did say that a Hausa youth, who operated a GSM call center at Sabon Gari, had reportedly “a misunderstanding” with a Jukun youth late Saturday afternoon. By the late evening on Saturday, that very same shop was set on fire and razed.

“But that incident was not a serious enough event (to touch-off this latest round of violence,)” added Suleiman Adam. He did add in further discussing the current series of events that, “many believed the misunderstanding had been settled.”

The violence is now said to have spread to other areas, including Rafinkada, a nearby town. Violent incidents have been reported in Ibi, but it is not clear if the round of violence there is related to events in Wukari.

Also troubling, and an area of concern is that some of the youth taking part in sporadic violence were seen in military uniforms. Joseph Kwalji, a police spokesman of the Taraba Command, confirmed the violence racking the local area, but was short on details about fatalities, and property damage.

Kwaji did tell reporters on the scene that both local police, including the Army have since been deployed in Wukari, and other local towns, and are working 24-hour shifts to restore calm.