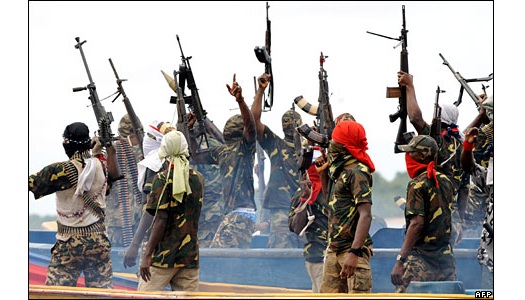 NewsRescue– Sensitive information reaching us details a very significant arms buildup in Rivers state in preparation for an operation against the elected governor who has been at odds with the president of Nigeria courtesy of his wife, Patience Jonathan who hails from the state.

Police in Rivers state are bewildered by the amount of ammunition being supplied to Niger Delta militants (terrorists) ahead of the operation code-named ‘Operation Amaechi Must Go.’

These militants (terrorists) according to the Intel are being repatriated from Lagos and Abuja to be involved in some form of armed action in the state to upset the government of the state, possibly by prompting the necessity for a state of emergency (SoE) to be declared, thus giving the opportunity for federal take over.

Sources detail that the state Commissioner of Police himself, Mbu, holds “strategy meetings” with these known (ex) terrorists, planning the action expected to commence in coming days.

The state police commissioner Mbu is meant to be redeployed and replaced by Mohammed Katsina from Imo state, however it appears the presidents wife blocked this redeployment, as Mbu is strategic for the armed rebel campaign to create chaos that promises to threaten the democracy of not only Rivers state but the entire nation as former military leader Abdusalam Abubakar has stated.

Update: A Senator, Babafemi Ojodu said yesterday the 7th that according to the military, Boko haram was moving to Ogere in Ogun State, Lagos and Port Harcourt. This it has been suggested may be a pre-explanation for explosions that may be set up with ammunition the militants have been given under the militants ‘operation against Amaechi’ that would make a logical justification to the governors demise via SoE.

Update: On July 23, Governor Dickson of Bayelsa who it is relayed spends most of his time in Aso rock, described a re-opening of militant/terrorist camps in his state, suggesting the governor of Rivers and that of Delta states were likely behind the arming of the militant/terrorists to ‘destabilize his Bayelsa.’

Niger-Delta Militants/terrorists are being armed!

More information as we gather it… When i saw these ex militants at Land Mark Hotels in Port Harcourt on Tuesday night, it was obvious they have a mission to accomplish from the Presidency. It was obvious to me also that our dear clueless, dumb and desperate President, his wife, Ezebunwo Nyesom Wike and some frustrated politicians had unleashed them against the state. For these youths, learn from past experience. Same people will use and dump you as other times. Set the state on fire and go reside permanently at Abuja. God is watching and would vindicate Amaechi and the vast majority of Rivers indigens.