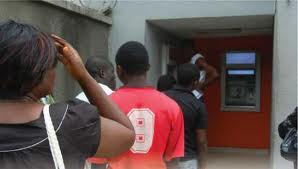 In Nigeria today, there are over 12,000 ATMs and this number
is going to increase to over 20,000 in a few years time. The banks are
desperately deploying ATMs all over the major cities, towns, villages, schools,
hospitals. These ATMs are deployed with one of the most of important service,
which is to dispense cash to customers whenever the customers want cash as long
the customer has the fund available in his or her account. A low performing ATM
is an ATM without cash.

Most banks have deployed their ATMs without
proper maintenance structure. These include maintaining the technical,
aesthetic, the hygiene of the ATMs and the safety of their customers. Some ATMs are found to
be worse than public toilets. There was a new study carried on ATMs in USA,
that found that there are more dangerous disease-causing germs and bacteria on
ATMs than that found in Public latrines. If the same study is carried out here in Nigeria, these disease dispensers called ATMs in Nigeria would be far worse.

In situations where the branches are left with the
responsibility of maintaining especially hygiene or aesthetics  of the ATMs using existing branch cleaners, most branches do not bother about the aesthetics or the customer as long there is cash available from the ATMs. The bank should be thinking their ATM is a branch on its own as a customer channel. Every
point of contact with a customer should be as important as the branch
itself or head office. Some banks just ignore these simple customer ethics and
forget about their most important self-service channel that represents the
entire bank as a whole.

For example, take a drive along Awolowo Road at Ikoyi,
Lagos, most of the ATMs are filthy, covered in dust and grime especially after a heavy rain. Some banks are not even aware of the importance of the ATMs, some use the
security guard houses and use dirty rags to cover their ATMs. Our Nigeria
weather and surrounding presents a real challenge since there is so
much dust, grit, smug and smoke in the air. Our culinary or diet, food,
habits and clothing means that we wipe our hands on what ever we see. The Cash
we even collect from the ATMs are in a bad state, that’s another topic
entirely.

According to a famous Microbiologist in the USA
who found out that ATMs are the 3rd dirtiest among 7 dirtiest
public places. It is number 3 in the list that include Restaurant Menus, Door
handles, Public toilets, Soap Dispensers, Lemon Wedges, and Grocery Carts or
trolley.

In some cities such as Port Harcourt, Kano, Abuja, the
ATMs are so filthy, you will need to cover your nose to use the ATM. A couple of weeks
ago, I visited an ATM along Ligali Ayorinde in Victoria Island, Lagos. I slot
in my ATM card, it took a while to read, then I tried pressing my PIN, but
ATM’s keypads were sticky, I had to force down each key. Also, the visual
screen was dusty, I had to bend so close to the visual screen to read the
messages on the screen. The worst came, when I had to struggle to take my cards
out of the card slot. This is common all over Nigeria among the 18 banks with
functional ATMs. The irony is that the ATM was within a large bank branch
complex within a city centre, I can imagine the state of ATMs in places like
Ile-Ife, Abaji, Ikenne, Ilesha or Kontagora.

Customers visit these ATMs without the knowledge that
each key on the keypad they touch contains a concoction of disease causing
germs and bacteria, which they eventually pass around. In the United Kingdom
where studies have been conducted, Experts took swabs from the numeric
keypads on a string of city centre ATMs around England that are used by
thousands of shoppers every day. They then took similar swabs from the
seats of nearby public lavatories and compared the bacteria under microscopes
in a lab. The swab were left to grow overnight and samples from both locations
were found to contain pseudomonads and bacillus, bacterias which are known to
cause sickness and diarrhoea.  Dr Richard Hastings, a microbiologist for
BioCote, a built-in, antibacterial product coating, said: ‘‘we were interested
in comparing the levels of bacterial contamination between heavily-used ATM
machines and public lavatories. ”We were surprised by our results because
the ATM machines were shown to be heavily contaminated with bacteria; to the
same level as nearby public lavatories”

Some Nigerian banks use branch cleaners without proper
training, who cannot differentiate between general cleaning and specialised
cleaning. These cleaners use the rags for cleaning toilets, tables and chairs to
clean the ATMs. The branch cleaners over time, discolour the ATMs, add more
germs and act as transfer agent for external germs into the bank and vice versa.

CBN has ignored this area of “KYC” but have focus more
on other “important” areas of compliance, e.g. cashless policy, more important
than the customers itself. NAFDAC, SON, NMA and other bodies have also not
initiated any study on these disease dispensers.  Some banks focus more on
the quarterly technical support from these ATMs supplier and spend billions of Naira. The Technical
Engineers only focus on the inside of the ATM (termed “PC-Core”) and do not
concern themselves with the beautification or hygiene of the ATM. As long as
the software is up to date and any electro-mechanical part is tested and
functioning, their business is completed. The Engineer gets signed off from the
branch manager and then maybe comes back to the ATM in 3-6 months time to
perform another update.

Case Studies from ATM manufacturers such as NCR, WINCOR, KingTeller and
others, shows that regular cleaning is an effective way to optimize the life
span of magnetic strip/PIN and CHIP card readers, and exteriors of ATMs. Most CEOs are
oblivious as to why the ATM Support budget is so high and is on increase every
year, yet their ATM customer satisfaction survey tells a different story. The
common sense is not common anymore. A simple cleaning schedule using tested
products will reduce their ATM Support spending drastically. In the UK, USA and
other Modern economy, the cleaning of ATMs are outsourced. This ensure that a
high quality of service is maintained throughout the contractual period.