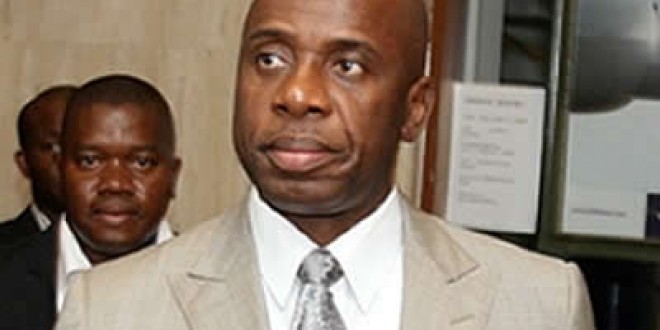 There was mild drama on Wednesday night at the Banquet Hall of the Presidential Villa, Abuja, venue of the Presidential dinner organised to honour Nigerian women.
The factional chairman of the Nigeria Governors’ Forum (NGF), Governor Rotimi Amaechi and his loyalists came in when the event was already in progress.
They were coming from Rivers Governor’s lodge where they met earlier for about 15 minutes and adjourned to honour the President’s invitation.
On his entourage were Governors Kayode Fayemi-Ekiti, Ibikunle Amosun-Ogun, Adams Oshiomole-Edo, Sule Lamido-Jigawa, Rabiu Kwankwanso-Kano, Abdulazeez Kyari-Zamfara, Muritala Nyako- Adamawa and Magartakada Wamakko- Sokoto.
Governor Amaechi after settling down, got up and made his way towards where President Goodluck Jonathan was seated in company of Presidents Joyce Banda of Malawi and Hellen Johnson Sirleaf of Liberia, apparently to pay homage.
However, drama occured when one of the Presidential Body Guard (BG) blocked Amaechi from meeting the President. The Governor resisted for a while but had to return to his seat when it was glaring the BG won’t allow him.

Also, Governor Amaechi, who was seated in company of the chairman of the PDP Governors’ Forum, Godswil Amaechi was not recognised at the even while but the chairman of the PDPGF, Akpabio was duely introduced.
Another drama that played out was the altercation between Amaechi and Akpabio. The duo accussed each other of being undemocratic.
“You are not democratic”, Amaechi told Akpabio and the latter insatantly fired back, “You too, you are not democratic”. Few minutes after that, Governors Amaechi, Fayemi and Oshiomole left.
Meanwhile, Governor Amaechi fielded questions from newsmen before leaving. The following conversation ensued between him and State House correspondents:

Is your presence here with other governors an indication that the problem in NGF has been resolved?

Amaechi: Was NGF sick? I don’t know about factions. We are holding NGF meeting and we agreed that those of us who were there should honour the President and attend the dinner, we have attended, you saw all of them, some have left and I am leaving too
Did you tell Governor Jang there is meeting now?
He was invited. What is my business if he is not there? 16 to 19. Are you not a Nigerian? 16 governors voted for him, 19 governors voted for me. If he does not accept the 19, he is undemocratic. Anybody who supports him, including television houses, are also undemocratic.
I have said it in a statement that if at any point in time we cannot uphold what 19 governors said, then we should be afraid of 2015.
If the PDP is suspending me for that reason, too bad.
We must learn to be democratic. I am not aware that the party has given any reason for suspending me, if that is the reason, too bad. The party is yet to give any reason for my suspension. I am not aware that the party suspended me for winning an election.
What is the way forward?
Amaechi: That is the question to ask Jang and those who are supporting him. Those with me are in majority.

Do Not Force-Feed Nigerians With GMOs

US President Obama Pushes for Homosexuals in ...