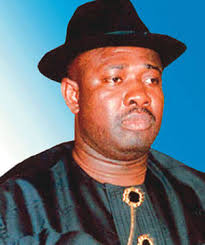 MINISTER of State for Agriculture, Heineken Lokpobiri, is on the spot again for alleged acts of violence in Bayelsa State politics. As a Speaker of the state House of Assembly, the minister was linked with the bombing of the Assembly following his removal as speaker under questionable circumstances.

With the state governorship re-run election in Southern Ijaw Local Dovernment Area, and 101 units in six local government areas just days ahead, community leaders in Ekeremor, the minister’s hoe-base are expressing serious concern over their safety as they are not on the same political page with their son.

They have therefore cried out, pointing out that their kinsman and the minister, Lokpobiri, is making life unbearable for them. Consequently, they are calling on President Muhammadu Buhari, to call Lokpobiri to order in the interest of peace and security in the riverine community.

The minister is a chieftain of the All Progressives Congress (APC), the governing party in Nigeria, and also the Director-General of the Timipre Sylva Campaign Organisation for the governorship of the state. At the moment, APC does not appear to be sailing well on the waters of Bayelsa.

In a letter to President Buhari, dated January 3, and jointly signed by the Chairman of the Community Development Committee, Preye Okoyen and Secretary, James Ombeh, the people appealed pleaded with Buhari to check the excesses of his cabinet minister and call him to order, in a frantic bid ensure peace and security in the boiling community before, during and after this coming January 9 re-run election in the nine units of the community.

Ekeremor people have estated their preparedness to vote to the party of their choice, adding that acts of violence and intimidation were totally condemnable and called on the leaders of the various political parties and their followers to go about their activities in the most peaceful and lawful manner to enable the people exercise their civic responsibilities without molestation.

According to them, ”we are constrained to appeal to Your Excellency to call on the Minister of State to order in the interest of peace, security and the exercise of our franchise. The people of Ekeremor community want to vote and do not want any violence and intimidation. Let every party leader and their followers go about lobbying peacefully and in a lawful manner so that the people can freely exercise their franchise.”

They are calling the attention of President Buhari to the alleged acts of brazen lawlessness by Lokpobiri, who on December 30 2015 arrived the community with a large number of uniformed and ununiformed security personnel, including soldiers, who on the night of December 31 2015, under the guise of ushering in the New Year, went about destroying the posters of rival party candidates and offices.

In the letter, the community also quoted Lokpobiri, as placing a phone call to a popular youth leader in the community, known as “Back to Life” that, he was sending someone to kill him, boasting that, unlike the December 5 exercise, he was better prepared for the this weekend’s re-run and would do anything, including the application of force to ensure that, the APC wins all the 9 units of Ekeremor Town.

While calling for the urgent intervention of President Buhari, the leadership of the Ekeremor community notes that, already there were signs of grave danger, stressing that, the tension in the community was palpably high.

They noted with regret that, there could be breakdown of law and order, if nothing concrete is done, lamenting that, majority of the members of the community are troubled by the mere realization that, the minister, who is their own son, is the very person terrorizing and oppressing his own people, instead of protecting them.

“Mr. President, these are signs of grave danger that is looming in the community towards January 9 and the tension in the community is palpably high. We foresee breakdown of law and order if nothing concrete is done by the authorities, because majority of the people of the community cannot stomach the realisation that we produced a Minister who has come to terrorise and oppress his own people whom he is supposed to protect”, the letter said.