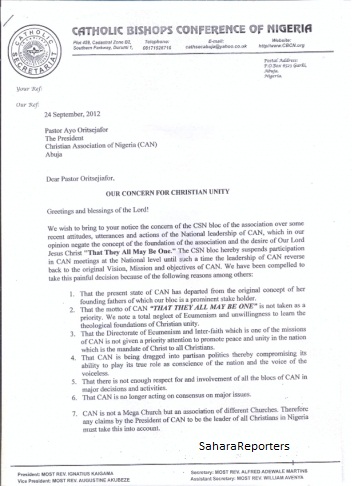 NewsRescue– The Catholic Church of Nigeria has pulled out of the Christian Association of Nigeria (CAN) headed by Pastor Ayo Oritsejafor, citing several reasons including CAN being anti-unity and peace of Nigeria, and CAN having been dragged into partisan politics.

This was disclosed in a letter of membership suspension released by the Catholic Bishops’ Conference of Nigeria, CBCN.

The Diocesan Administrator of the Catholic Diocese of Abeokuta, Monsignor Christopher Ajala, at a news conference stated that the Catholic church suspended its activities in CAN because it was too close to government. -C0dewit

Nigeria, Africa’s largest nation and a nation riddled with poverty, though a top world oil supplier, is led by a PDP government and is a highly politically tense nation with many allegiances and political thuggery including assassinations.

Nobel  prize winner, Wole Soyinka has accused the ruling PDP party as being a “nest of killers,” attributing them to being behind the Boko Haram terrorist organization which has killed hundreds of innocent Nigerians and is accused of bombing the UN office in Nigeria.