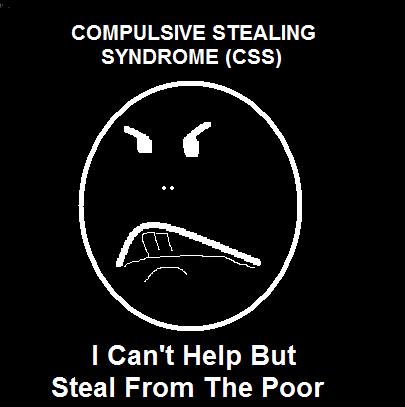 Have you ever asked a friend for financial assistance and they said they couldn’t oblige, then same instance, they took you and whoever else was available to be ‘impressed’ out to buy all of you drinks, excited to spend triple what you begged for on getting you drunk and bloated? This friend potentially has Compulsive Stealing Syndrome. Given the opportunity, he will steal, even from you.

Compulsive Stealing Syndrome (CSS) is a psychological and behavioral disorder that typically presents with helpless, chronic addiction to stealing from the less privileged.

Characteristics of CSS include, repetitive and uncontrollable looting, quasi-ambitious positioning to steal, love of power due to its securing greater ability to steal and deprive, preference for stealing from the poor, lack of initiative and foresight, kleptophilia (love of theft) with hybristophilia (attraction to criminals) and a decreased sense of self worth with self appraisal being morbidly connected to the accumulation of stolen wealth or property.

Etiology and Course of CSS:

A syndrome that is derived both from nature and nurture; signs and symptoms of CSS can be identified in early infancy. Infants who bring home items from unknown sources are at risk of developing CSS later in adult life. If there is poor parenting and these children are not queried as to the source of their treasures and reprimanded properly, a sense of fulfilling needs by robbing others develops. In some cases, the parents pretend not to realize the child is stealing and actually praise and reward the children for their ‘sorting themselves out’ with toys and sweets. The story of ‘Eze the thief’ comes to mind.

There is a genetic predisposition to CSS. Usually CSS patients are children of CSS parents and grandparents. The parents were abused and encouraged to fend for themselves by theft as children and they pass this on to their children.

In school life, these are the students who steal pens, and sometimes when caught, are seen to have a stash of so many pens—all the stolen pens in the class—which is confusing as to why they would have stolen more pens than they can possibly need or ever use. CSS students are not the brightest in class and they actually write the least even though spying, and have the least use of these pens. Stealing at this stage has turned into a dependent need to gratify self by inflicting suffering on those who have been robbed. They steal the pens, not out of need but because the chronic habit has gotten them addicted to the pleasure of inflicting pain on their victims who suffer the loss of their pens.

CSS ‘graduate’ as Doctors and lawyers, thanks to exam cheating and fake degrees. As CSS pass through adolescence, some learn to hide their disorder and appear to function normally in society; others become frank robbers.

The CSS who have now entered regular society are very ambitious. They seek top jobs, not for the service they can provide for the people, company or government, but out of a thirst for utilizing the top position to steal and deprive thousands at a time.

CSS sleep, eat and dream of robbing the poor. It takes great skill to rob from the tight-fisted affluent, but it is easy to rob from the open handed poor, distraught and needy. In fact the poor will give it to you, eyes wide open. CSS hone on this. They rob the poor directly via imposed fake levies, taxes, subsidies, oligopolies and again rob their lot from the nation’s treasury. When they hire staff or nominate officers and cabinet workers, the one question they ask of their appointees is—what can you bring in for me.

As the condition progresses, CSS get less and less satisfaction from the wealth they accumulate. They could have hundreds of houses in their villages and abroad, more than they can even remember, talk less live in, but they want to steal more. Stealing is no longer for the satisfaction of wealth. They cannot be satisfied by wealth at this point. Stealing is now morbidly attached to the pleasure of depriving others. CSS believe and view the world as having two types of people: the CSS and Chremastistophiliacs (the lovers of being robbed). They feel gratified and empowered by the presence of the dependent and subservient. When you visit the CSS for help, he keeps you outside his door waiting for hours on end. Finally he sends his servant to tell you he is sorry, he cannot come out, he will help, but please come back in a week. This goes on indefinitely. Your pain is his only remaining pleasure in life.

CSS is a chronic and serious disorder. The CSS lack insight to their problem. Confronting them is one of the greatest mistakes people often make. The more the CSS are confronted and called thieves, the more they feel insecure and that their campaign of calumny has not yet made poor slaves of the people. These narcissists desire not simply abject poverty for all, but poverty-hopelessness. That you confronted them shows power, ability and food in your belly. They will steal and kill more if confronted and called thieves. Please avoid this. 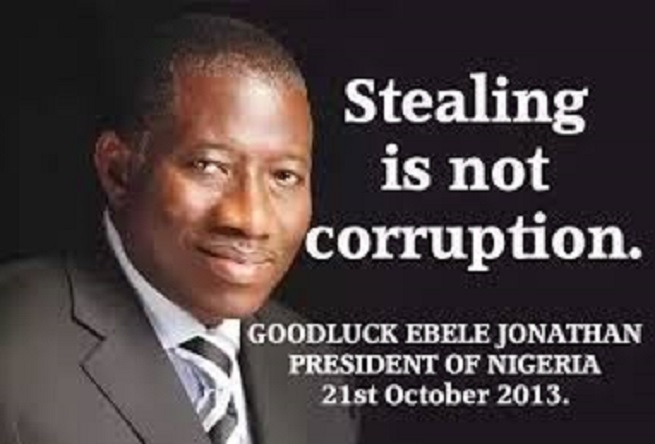 CSS is a terminal illness. We see the CSS regardless of the unbelievable wealth they have already stolen and lives they have destroyed by theft and maliciousness, are still positioning themselves in office, government, etc at 70 years, 80 years, 90 years and till they die. We are seeing many CSS dying these days, till the last minute, actively engaged in setting themselves up to steal to deprive. These rather unfortunate sufferers need professional therapy. You will do the best by getting them CSS help via stylishly recommending therapy for them for some other condition, perhaps their depression*, having already secretly advised the therapist that they suffer from CSS. [* CSS patients usually have co morbid psychological conditions like depression and mania and are violent and abusive to family.]

Do not address like armed robbery. Unlike armed robbery, CSS is not solved easily by social rehabilitation. Armed robbers usually steal out of need. They steal preferably from the rich. Armed robbers give to the poor. The CSS steal preferably from the poor and to give to and associate with the rich. They work with the rich to plot and plan how to steal from the poor and further deprive them. Theirs is not stealing out of need, it is stealing to impoverish out of a chronic dependent feeling of self worthlessness. If the CSS sees poor in rags fetching water from a well, he plans how to put a lid and padlock on the well and have the poor pay him per bucket fetched. This is a very deadly and unique disorder, most peculiar to Africa.

In the western world, power thieves steal too, but when seeking office, have a mission to do something, make life livable for the people. Those in western societies understand that healthy people with basic amenities are essential for future stealing and safety from anarchy. Not so with the CSS, an African disorder that is totally self extirpative and internecine.

The physician needs to handle these patients carefully. Inquire about child abuse, being ‘spoiled’ as a child. Ask about toilet control and when the patient first gained self control and restraint. Ask about their relationship with their parents, domestic violence and abuse including incestuous rape in the house. Inquire about their parent’s profession.  Being a disorder with hereditary links, the parents professions may typically be answered as ‘unknown,’ politician, or sometimes, even straight-forth, thief.

Recommend taking time to visit prisons, volunteering in charity organizations in direct contact with the poor. It is helpful sometimes to try to reconnect these people with the greater things in life. Things that can give them the happiness they have given up on finding, as wealth accumulation only brings more desire, greed, anger and frustration. The CSS hate the smile they see on the poor man’s face. It is a smile and true happiness they lost from early childhood. They will give all up to smile a true smile once. But the distance they know exists between them in their fortified cars and mansions and the poor, makes this impossible for them. 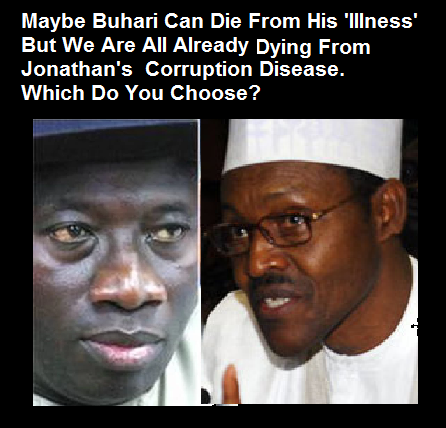 Discuss with them about a legacy. Some CSS are very intelligent. Tell them about people of old who died and their names are remembered. Let it seep into their conscience that those remembered were hardly the rich, but those who left great positive legacies. Who Did Something for the people. With this approach, you can penetrate their profligacy and greater narcissistic desires and not heal them, but convert their greed into a greed for a good post-humus legacy. We see CSS purchasing acres and buying gold plated coffins ahead of their death. These things matter and work.

If behavioral therapy fails, quickly place them on powerful anti-psychotic meds. CSS are deadly and very dangerous. Their reckless looting, poverty-enhancing, money-wasting, policy-unfriendly, corruption-inflating, selfish policies and deprivation of the poor, lead to deaths of thousands. If high doses fail, consider straight-jacketing. Many CSS fund thugs and terrorism; confer with the law, media and human rights organizations if they get out of your control.

MEDICAL DISCLAIMER: The information contained here is solely intended for the general information of the reader and not intended to diagnose health problems or to replace professional medical care. It is not to be used for treatment purposes, but only for discussion with the patient’s physician. This information is not intended to dictate what constitutes reasonable, appropriate or best care or substitute for the independent judgment of a physician for any given health issue.