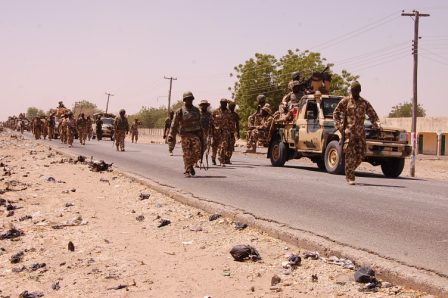 The Nigerian Armed Forces have renewed commitment to continue the ongoing coordinated joint assaults on Boko Haram in the northeast until the operation of the guerrillas are totally impaired and collapsed.
To this end, the coordinated operation of the security forces in the contested area designed to dismantle the technical preeminence and capabilities of the terrorist group would intensify because the masquerading guerrillas should not be given any breathing space to regroup and re-strategize their campaign.
For optimum success in the counteroffensives, the recent deployment of the 7th Brigade of the Multinational Joint Task Force (MNJTF) in the Lake Chad Basin would ensure a total blockade of possible escape routes in the area to forestall further infiltration of the terrorist elements into the country and its neighbours.
The terrorists are hereby warned to stop their mindless acts of violence and embrace peace in order that they might become useful citizens contributing positively to the socioeconomic development of not just the northeast but the country as a whole.