The Economic and Financial Crimes Commission (EFCC) has seized four houses worth N872 million from a former Minister of the Federal Capital Territory, Sen. Bala Mohammed, and his son, Shamsudeen Bala.

The ex-minister is also under investigation on alleged fictitious contracts of about N1billion, allocation of 12 choice plots worth billions of naira and 37 other commercial plots of land worth about N8 billion to his suspected front named Tariq Hammoud as well as the controversial N1 trillion Abuja land swap.

More than 16 companies linked with fictitious contracts awarded by Bala had been under surveillance and their owners grilled by EFCC.

Tangaza, who had been in detention in the past one week, was battling for bail as at press time.

She has, however, been linked to N800 million questionable contracts to her personal firm apart from benefiting from plots of land from the ex-minister.

According to investigations, the ongoing probe of the ex-minister followed petitions against him, including complaints  pending since 2013.

It was gathered that following preliminary findings, EFCC obtained an interim forfeiture order to confiscate a N650 million house at 1 and 3, Mariam Mukhtar Street, Asokoro.

The same forfeiture order was secured to seize the ex-minister’s son three duplexes costing about N222 million in the Apo Area of Abuja.

A top source in EFCC, who spoke in confidence, said: “We are probing the immediate past Minister of FCT on many allegations against him, including award of N1 billion fictitious contracts; abuse of office by allocating 12 choice plots to his son and 37 other commercial plots worth about N8 billion to Hammoud, who is suspected to be his front; land swap, among others.

“Some of the petitions against Bala Mohammed had been pending since 2013. Initial findings showed that the ex-minister used fictitious companies to award contracts worth N1 billion in FCT. In one instance, a man with three companies was allowed to bid for one slot.

“About 16 companies used for fictitious contracts are under investigation because they did not supply items credited to them.

“Some of those quizzed so far confessed that Bala used unconventional methods in raking illicit funds and laundering same. Each time the ex-minister allocated a plot of land, he would find out the market value and ask you to pay half of the amount to him in cash.

“For instance if a plot of land was N2 billion, Bala would ask for N1 billion cash from the prospective buyer. He was smart in collecting cash.

“But the EFCC has traced allocation of 37 commercial plots to Hammoud and how N8billion was made from it. In fact, we saw a proposal by Tariq Hammoud to sell some of the plots.

“So far, our operatives have arrested, detained and quizzed Shamsudeen. He is presently on administrative bail. We have also interrogated Hammoud.”

Responding to a question, the source said: “Based on substantial findings, we approached the court to obtain an interim forfeiture order to seize a N650million from the ex-FCT Minister.

“What happened was that the former minister allocated some plots of land to Aso Savings and they bought the N650 million house for him at Nos. 1 and 3, Mariam Mukhtar Street, Asokoro District.

“The EFCC has confiscated three duplexes totalling N222million which were acquired by the ex-minister’s son. 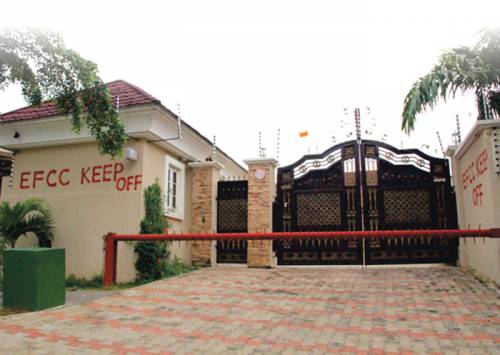 “We invoked sections 28 and 34 of the EFCC (Establishment Act) 2004 and Section 13(1) of the Federal High Court Act, 2004 which empower the anti-graft agency to invoke Interim Assets Forfeiture Clause.

“Section 28 of the EFCC Act reads: ‘Where a person is arrested for an offence under this Act, the Commission shall immediately trace and attach all the assets and properties of the person acquired as a result of such economic or financial crime and shall thereafter cause to be obtained an interim attachment order from the Court.’”

On the fate of the ex-minister, the source said: “We are investigating him, we are yet to invite him for questioning. Certainly, we are closing in on him.”

The source added that  EFCC had grilled top directors of the FCT administration. “As for Ms Jamila Tangaza, we arrested and detained her because she was connected with the land scam and abuse of office.

“The ex-minister asked her to resign her appointment with BBC and appointed her as a Senior Special Assistant on Media and Information. But Bala allocated some plots of land to her to sell in order to acquire a mansion in Asokoro District too. Her house was allegedly worth N158million.

“Also, Jamila allegedly abused her office by awarding N800million contracts to her company which is called Songbird Multimedia.

“Her case was interesting. When she registered the company with the Corporate Affairs Commission, she used a fictitious name as the CEO of the company but she is the sole signatory to the company’s account and her phone number is the point of contact with the firm.

“We have sent her signature on CAC document and other specimen signatures collected from her to a forensic laboratory. Following a court order, we detained her in the past few days but as at Friday, she was pleading that we should grant her bail. We are looking into her request.”

The top source denied insinuations that the ex-BBC correspondent was handcuffed when she was taken to her office for a search.

The source added: “You can verify from her what transpired. From custody in EFCC, we went with her to her office to recover some documents. We used the EFCC bus but along the way, she begged us to park the bus away from the vicinity of AGIS where she is a director. She did not want her staff and others to notice that she was brought to the office by EFCC team.

“We obliged her request by parking outside AGIS. We also didn’t allow policemen in uniform to follow her to the office. We assigned plain-clothe operatives and even asked her if she wanted the only lady in our team to follow her so that Jamila can blend with the crowd in AGIS without anyone suspecting anything.

“She said all plain clothe operatives can follow her. We did not put her in handcuffs. This is the extent we went based on her request to protect her reputation and integrity. The story of Jamila being handcuffed was rubbish.”