“I recognised his weaknesses; the worst being his inability to be loyal to anybody or any issue consistently for long, but only to Nasir el-Rufai.”
-Chief Olusegun Obasanjo (MY WATCH)

The Midget Kaduna state Governor, Nasir Elrufai, is in the news again not for the inhuman mass grave burial of 347 Nigerians massacred by the Nigerian Army in Zaria in December 2015 and not for the huge amount of money he paid the murderous terrorists who killed more than 800 innocent Nigerians in Southern Kaduna, Elrufai is in the news for his 30 page Memo to his political benefactor President Buhari. President Buhari is sick and recently spent more than 50 days on a medical vacation in London, on his return his supporters were calling for prayers but Elrufai chose to welcome him with a 30 page Memo that was highly critical of his style of governance and his close associates.

In history the month of March is notorious for the betray of a leader by his close associates. In Roman times, the Ides of March is best known as the date on which Julius Caesar was assassinated in 44 BC. Caesar was stabbed to death at a meeting of the senate. As many as 60 conspirators, led by Brutus and Cassius, were involved. According to Plutarch, a seer had warned that harm would come to Caesar no later than the Ides of March. On his way to the Theatre of Pompey, where he would be assassinated, Caesar passed the seer and joked, “The Ides of March are come”, implying that the prophecy had not been fulfilled, to which the seer replied “Aye, Caesar; but not gone.” 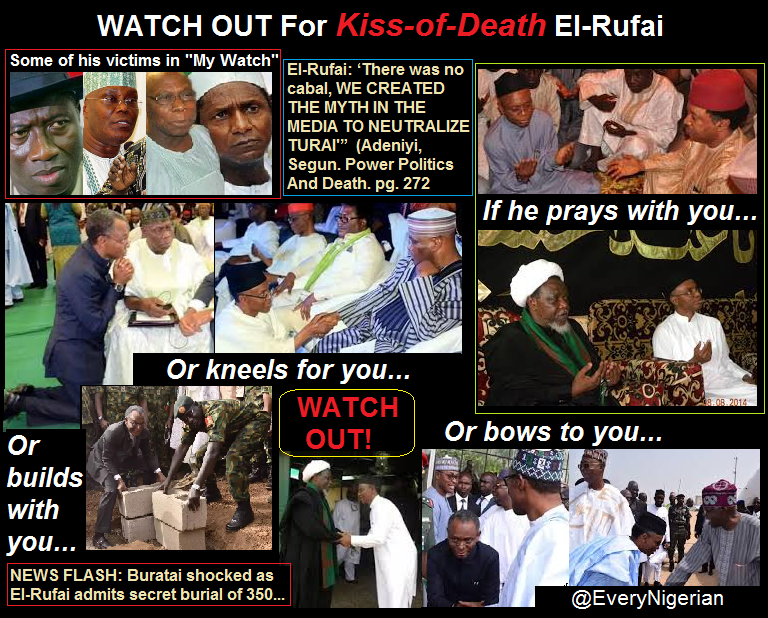 There are three (3) reasons why Elrufai sent a 30 page Memo to President Buhari. The first reason is that it is Elrufai’s nature to betray all those that trusted him as his former Boss former President Obasanjo rightly described him in his Book “MY WATCH”. Elrufai had betrayed Abubakar Atiku, ChiefObasanjo, Umaru Yar’Adua, Goodluck Jonathan etc. Those that know Elrufai knows that it is a matter of time before he betray his current political benefactor President Buhari. The second reason for the Memo is that Elrufai saw clearly that the Buhari administration is failing woefully, he want to jump ship to save himself politically. This is Getting to 2 years of assumption of power and the Buhari administration does not have a single achievement to show. The third reason for the Memo is that Elrufai attacked the Buhari cabal to please the Tinubu camp of the ruling party so that they should consider him for Vice President slot as the incapacitated Buhari will eventually be forced to resign for health reasons.

It is important to note that Elrufai had criticized and condemned President Buhari in the past when they were in different political camps. This is an exact quote of what Nasir El-Rufai said on October 4, 2010: “Mallam El-Rufai wishes to remind General Buhari that he has remained perpetually unelectable because his record as military head of state, and afterwards, is a warning that many Nigerians have wisely heeded. His insensitivity to Nigeria’s diversity and his parochial focus are already well-known.”

The 30 page Memo is not the first time that Elrufai betrayed President Buhari as most Nigerian analysts are suggesting. The first time that Elrufai betrayed President Buhari was when he unexpectedly confessed to the kangaroo Judicial Commission of Inquiry (JCI) into the brutal #ZariaMassacre that he buried 347 Shiites in a single mass grave in Mando. After the massacre of more than one thousand Nigerian civilians in Zaria by the Nigerian Army that was ordered by President Buhari, the Buhari cabal wanted to give the figure of “7 Shiites killed and 10 others injured” and that was what the Nigerian army Chief Tukur Buratai told the National Human Rights Commission (NHRC), Abuja. But Elrufai betrayed this position when he learnt that the London-based Amnesty International has located the mass grave in Mando using Satellite photos.

To fully understand the demonic manipulations of Nasir Elrufai then we should consider the testimony of Segun Adeniyi, former editor of Thisday and spokesman to the late President Umar Musa Yar’adua:
“On the way, Balat, himself a former minister in Obasanjo’s government, asked, ‘Segun, this cabal thing, were you really a member?’ Before I could respond, former Federal Capital Territory minister, Mallam Nasir el-Rufai, who played a prominent role in the campaign that eventually brought Jonathan to power, interjected, ‘There was no cabal, WE CREATED THE MYTH IN THE MEDIA TO NEUTRALIZE TURAI’” (Adeniyi, Segun. Power Politics And Death. pg. 272)

On a final note, the evilness of the Kaduna State Governor Nasir Elrufai is not only limited to betrayals of those that trusted him and burying hundreds of innocent murdered Nigerians in mass graves. Elrufai also paid murderous terrorists huge sum of money who killed hundreds of innocent Nigerians in Southern Kaduna. The best place for this man is not the Kaduna state Government House, the best place for this man is the Jail House of the International Criminal Court (ICC), Hague, for his heinous crimes against innocent Nigerians.