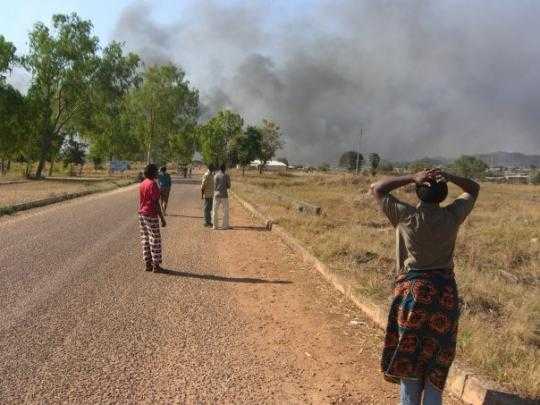 The stage is set for committing a major war crime in Nigeria. The Special Task Force (STF) in Jos under the command of Maj-General Henry Ayoola yesterday issued an order of evacuation within 48 hrs to a number of Fulani dominated towns in Barikin Ladi and Riyom Local Government Areas for a military operation that will commence there, otherwise, their lives cannot be guaranteed. The STF statement read:

1. This is to inform the people residing in Barikin Ladi and Riyom Local Government Areas that a military operation is ongoing in the area. The inhabitants of Mahanga, Kakuruk, Kuzen, Maseh and Shong 2 are to evacuate immediately with their property within the next 48hrs.
2. Meanwhile, residents of Kura Falls, Kuzuk and Sharuk Rim of Gashish and Bachit districts respectively are enjoined not to panic and to be careful of their movement within the area and avoid places of military operation until further notice. People are enjoined to report any suspicious movement and activities in their areas.

3.You are please requested to use your medium to disseminate this information to the general pubic. It is to be announced routinely throughout the period of the operation in order to avoid any hazard to human lives and property.

The allusions I made in my last Friday article are becoming real: the STF is playing the bid of the Plateau State Government to cleanse Berom-dominated local government areas of Jos-South, Barikin Ladi and Riyom of Fulani, as they did with the Hausa. The allegation that Ayoola is a puppet of Governor Jang now seems more probable than ever before. But that is not the catch.

The catch is this: The Fulani have vowed not to move an inch from their homes. Those I contacted have told me that they have sworn to stay put, come what may. Their argument is simple: There has never been in the history of any democracy, no matter how lousy it is, that people in so many towns would be driven out of their homes without any order from a court of competent jurisdiction or any arrangement made for their relocation but by just an order in the name of military operation, as if they are boarding students that are sent home when their school is shut down after a riot. You cannot do that to whole families, much less to whole towns. It is a war crime under International law.

Therefore, pertinent questions to ask on this matter are: Where do the Fulani go? What alternative have you given them? Are the Fulani – with their entire family, property and cows – just a collection of sheep that can be driven away at will in accordance with the whim of someone, devoid of any right? Why would a government that claims it is desirous of peace side with one of the two warring factions and fight the other? What has happened to Berom militia that have been committing war crimes against Hausa and the Fulani in the area for eleven years now? Has the Nigerian government arrested them or destroyed any of their homes? Has it issued an evacuation order for the residents of Haipang and Riyom that continuously kill defenceless Nigerian citizens travelling on the highways that pass through their towns? Why only the Fulani? Why?

The military is increasingly proving itself incompetent in handling matters of internal security in this country. It has emasculated the police that is the only institution with the constitutional mandate to do so and taken over its role. Since the late 1970s, the military has opposed modernization of the police through upgrading it with modern technology and new approaches of keeping internal security. The police today remain sidelined in the scheme of internal security. Everybody calling the shots in this domain of theirs is a soldier, who is trained best to defend our borders and contribute to UN peacekeeping missions. Major-Henry Ayoola and his colonels field commanders that are set to massacre Nigerians should be sent to Mali to face al-Qaeda to prove that they deserve their ranks.

Also, Ayoola in his short tenure as the STF commandant has shown sufficient partiality to warrant his redeployment. Fulani on the Plateau are bonafide Nigerians, not its enemies that deserve the bullets and tanks of the Nigerian military establishment. Ayoola must go.

It is gladdening to note that it is not totally dark. A number of human rights groups have risen in solidarity with these poor souls. A number of media houses, particularly the foreign ones, have also in the past 12 hours played their role of informing the world of the pending massacre. Their cameras are set on the scene.

The Sultan – who is the leader of the Fulani in Nigeria – and other elders have also waded in. The result of their intervention before the ultimate authorities in the land is expected to be positive. He should be allowed to remain a leader, and not to metamorphose into their commander.

The irony here is that the National Security Adviser, Sambo Dasuki, is a not only a Fulani but, like the Sultan, a direct descendant of Danfodio, the quintessential Danfodio that fought for justice and got it in 19th Century Hausaland. How could these injustices be perpetrated just two weeks after he visited Jos and assured the world that he will do his possible best to bring peace? Is driving the Fulani from their homes a means of bringing about peace? He should rise to this threat which, as I said, will prove to be worse than that of Boko Haram. If he is away, he should return to the country. His office is on fire.

But just in case Ayoola and his troops are recalcitrant and they go ahead with their intended war crime against all appeals, they should prepare their hands for the ultimate responsibility of any civilian life lost in their so-called ‘operation’. If the Nigerian authorities would continue to remain partial and indifferent on the matter until the massacre is committed, the International Criminal Court is there, watching and waiting. One day, Ayoola, Jang, the Chief of Defence Staff and Jonathan – who is away and apparently was not even consulted on the eviction exercise – will only have themselves to blame.

I support the decision that the Fulani stay put and prefer to die gallantly than to flee in the face of an army that cannot even contain the insurgency of Boko Haram. I support it 100%. To die by the sword in defence of your right is better than to live in humiliation of subservience to any mortal. This is a doctrine written in their genes. I have no doubt that they will prove me right.