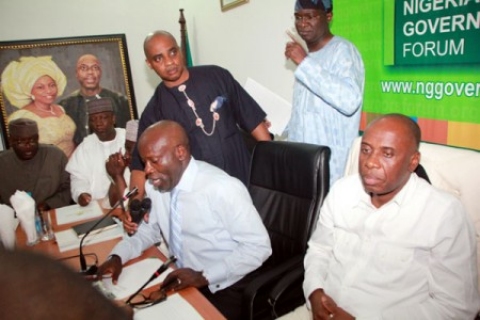 Nigerian governors have demanded the immediate resignation of Nigeria’s Minister of Finance, Ngozi Okonjo-Iweala, accusing her of failing to implement the country’s appropriations law.

The governors’ decision was contained in a communiqué they issued after a meeting of the Nigerian Governors Forum. The meeting took place at the Rivers State Governor’s Lodge in Asokoro, Abuja. Governor Mr. Rotimi Chibuike Amaechi of Rivers State presided over the meeting which was attended by 16 governors.

Mr. Amaechi also read the communiqué at the end of the three-hour meeting. In it, the governors drew attention to the non-compliance with the revenue projection of the Federal Government of Nigeria 2013 budget, blaming Ms. Okonjo-Iweala for her poor management of the economy. The forum stated that the non-compliance was a direct breach of the appropriations act of 2013.

The governors expressed serious concern over the management of the economy by Ms. Okonjo-Iweala, and called for strict adherence to the Appropriations Act of 2013. They stated that the minister should resign if she failed to implement the act. The Governors Forum stated that the National Economic Council is constitutionally responsible for the management of the economy and should be used for that purpose as opposed to the economic management team constituted by the Presidency.

In addition, the governors once again called on the National Assembly to legislate the separation of the office of the Accountant General of the Federation from that of the ministry of finance for better accountability and management of the economy.

The governors also reviewed the polio situation in the country, noting that some progress had been made in 2013 compared to 2012. It called on all governors to remain focused on anti-polio programs in their respective states to ensure the eradication of the disease.

The governors also offered their condolence to Patience Jonathan, the wife of President Goodluck Jonathan, over the loss of her mother. They also send condolence messages to Governor Babatunde Fashola of Lagos State who had lost his father, and the family of former Governor Olusegun Agagu of Ondo State who died last week.