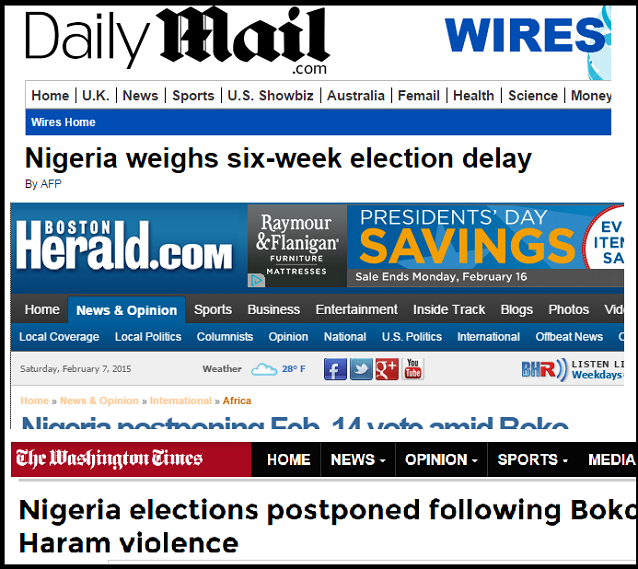 Nigerians awoke to headlines across the global media categorically stating that Nigeria had decided to postpone its February general elections.

The headlines were precise: Nigeria was shifting the elections by 6 weeks; reason- to combat Boko Haram.

But Nigeria’s local media somehow were in the dark and the nation remained in suspense till after 9pm of the same day.

NewsRescue categorically confirmed the postponement and new dates in our publication at 4pm Nigerian time.

While many were entertained by the rigmarole and pretense elections that were transpiring in the Independent Electoral Commission, INEC meeting, those who know the Jonathan government were not entertained and thrilled.

Nigerians were deliberately taken for a ride. The meetings were a simple sham.

The decision to postpone the elections till March 28th and April 11th were taken since before the previous night; actually the decision was made since earlier than when Nigeria’s National Security Adviser, NSA Sambo Dasuki made a sudden appearance at Chatham house at the end of January in the United Kingdom to address the British on the state of affairs and the decision to postpone the elections. We could go actually go back further, but we will stop there to aid clarity.

The global media was accurately fed this information by the Nigerian administration and its Caucasian consultant thinkers.

The reasons and steps were simple:

1. the Goodluck Jonathan administration has never demonstrated respect for the Nigerian people; this made it easy to betray the people and dribble them.

2. the Jonathan administration intended to suppress the expected people’s angry reactions and as such began a system of slow sensitization, aided by the Chatham address, and the global media press releases.

3. the plan for Saturday was to announce the shift in dates at the end of day. People including political party representatives and Civil right unions participating were just taken for a ride; the voting that took place was tossed in the garbage. The press releases had already been prepared and disseminated to the global press while the entire charade was going on simply to delay till night fall.

4. the drafting of the military across the nation as we promptly reported was no accident. It must be recognized that there was no such draft of thousands of soldiers during or after the Council of state meeting that was supposedly to reach the same conclusion; but this Saturday the military was drafted in preparation for possible protests.

5. finally at 9pm, the decided time, the press release was made by Prof. Attahiru Jega and the Nigerian press went ahead to inform the public.

And that summarizes what Nigerian went through Saturday. The people were taken for a ride again, unfortunately; and these ‘little’ things count.

We assure you CATEGORICALLY that based on accurate intel, the decision to postpone the elections and the utility of the Army to force this change was made weeks ago and not any time recently.

Our follow article will present the actual reasons for the postponement. Stay tuned to NewsRescue for your citizen rights and protection of your intellect and humanity.