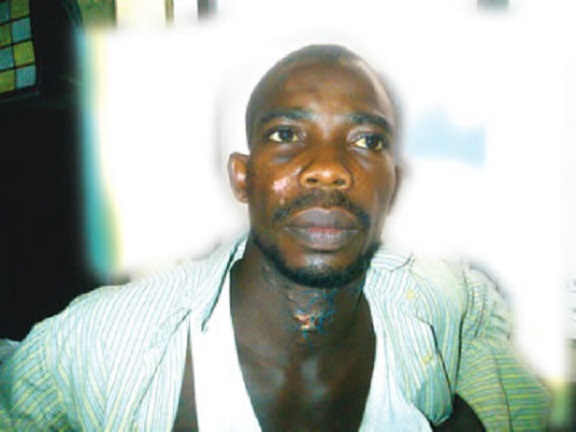 According to police investigations, Daniel stabbed his wife to death after catching her making love to another man in a bush near their home.

According to a police source at Elemoro Divison, after stabbing his wife many times, the suspect also stabbed himself in the stomach and in the neck.

The suspect and the wife were thought to be dead,  forcing the residents to call the police to evacuate the corpses

As policemen were packing the corpses to the mortuary, Daniel was, however, discovered to be breathing and was immediately rushed to the hospital.

The suspect, who had been discharged, told PUNCH Metro that the incident was the work of the devil.

He said he loved his wife dearly and never hit her prior to the incident, adding that when he caught her red-handed committing adultery, he lost control.

He said, “I am from Benin Republic but I have been living in Nigeria since 2001. I have two wives. My first wife has six children for me. However in 2010, I got married to Meno (the deceased) and we have a one-year-old child together.

“I am a bricklayer by vocation and I have never denied Meno of anything, even though she was a hairdresser and was making money. I was also faithful to her and showed her love.”

Narrating what transpired on the fateful day, the suspect said he came back from work in the afternoon and needed to collect something from the deceased.

He said as he was looking for her in the house, he was drawn by sounds emanating from a nearby bush.

He said, “When I heard the sound coming from the bush, I moved near and saw my wife having sex with a strange man. As I moved closer, the man saw me and ran away. But I was able to grab my wife and I gave her the beating of her life.

“I did not know what came over me, but I took a knife and stabbed her all over her body. Before I realised what happened, the devil also pushed me to stab myself. I stabbed myself in the stomach and also slit my throat.”

Daniel said some of his neighbours, who were drawn by the noise, started beating him up when they saw his wife on the ground.

He said, “After stabbing myself, I was still moving on the floor although I was weak. Some people came around and started beating me, saying that I must die too since I had killed my wife. They beat me up and took photographs. When I woke up, I found myself in the hospital.”

The suspect urged the police to release him as he was not himself when he was committing the crime. He said if he was sent to prison, his children would suffer.

He said, “My first born is 13 years old while my youngest child is a year old. I pay their school fees and I am responsible for their upkeep. If I am sent to prison, they will all suffer.”

The Deputy Police Public Relations Officer for the state command, Damasus Ozoani, said the case had been transferred to the State Criminal Investigation Department.”