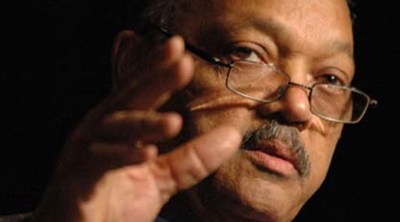 American Civil Right Activist and former Presidential aspirant, the Rev. Jesse Jackson has said that Nigeria must remain united, despite the political and security challenges facing the nation at present.

He dismissed the doomsday predictions that the security challenges and agitations by politicians ahead of the 2015 Presidential Election would disintegrate the country, declaring that Nigeria must remain a One and United Nation.
Jackson, who was in Yenagoa as a Guest Speaker at the 2013 Isaac Boro Day celebration, said that the issues of terrorism was a global phenomenon and the people involved were killing innocent people to attract attention.

“But it should be known that when one has democracy, issues can be resolved through non-violent means. You can create a new leadership and take over leadership with the right message of change. You have the right to peaceful protest and the free press. So, you don’t need to kill somebody before you can be heard. You can be heard by simply sitting down and talking.”
He said, “There is problem in democracy when people can’t talk and be heard to change things. These people tend to speak in a voice that would be heard. When people fail to be heard and participate, it becomes a valueless democracy.”

Jesse Jackson noted that the reported deployment of drones and troops to troubled areas of the country was a decision that could be made by the President based on facts and intelligence available, but pointed out that the American example on the deployment of drones had not been palatable, “the country must spend more time on conflict resolution. You cannot put out the pains of the suppressed people in that way. You must resolved conflict with justice.”

According to him, “Nigeria must be determined to achieve a united Nigeria to achieve joy. That is a Nigeria decision. States have their place and traps have their traditions. But the ultimate protection should be one Nigeria. One Nigeria must be achieved for the country to achieve power. Nigeria must not disintegrate and must remain strong, with or without doomsday predictions on the acts of violence and terrorism, the issues must be resolve through negotiation and not separation. In America we had the South threatening to secede, but the President fought to keep the union.”

On the proposed Amnesty deal being dangled before the Boko Haram sect by President Goodluck Jonathan, Jackson commended the decision and insisted that the Amnesty must be made to work with the full conditions spelt out and fulfilled by both parties, adding, “I think the Amnesty must work and the conditions fully honored. Amnesty must involve the economic restitution, the jobs and the training.”

He also pleaded with President Goodluck Jonathan not to hesitate to return to the dialogue table with the Boko Haram sect if the State of Emergency declared in the three states of the North has achieved maximum target, wishing that, “I hope the country will soon get back away from the battle field and get to the negotiation table. In the end, it will be the bargaining table. It is not the battle field that wins victory. You cannot battle forever. You can bargain and resolve the conflict in the North. Bargaining does not mean weakness, fear but it means maturity and good thinking.”