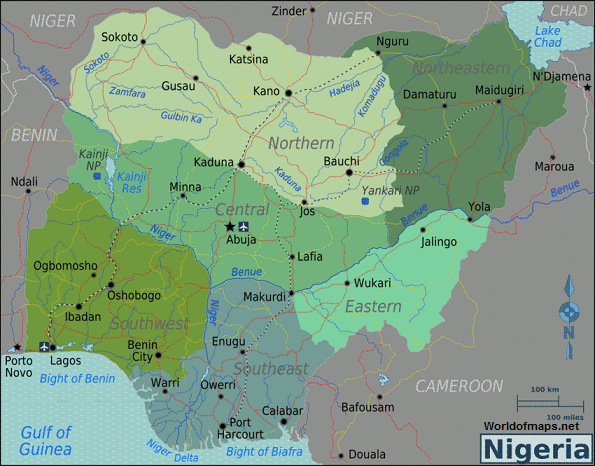 I pledge to Nigeria my country, to be faithful, loyal and honest…

I have kept my pledge, being faithful and loyal; now it is time I am honest. We need to all come forward in the interest of life, to discuss and deliberate on if and how to break up Nigeria into manageable pieces. The nation is simply too large, the people too sheepish and the leaders too opportunist and rapacious for it to work. And in the interest of life, dignity and progress, smaller projects will be more favorable.

Some of us have dreamed of and solicited revolutionary fresh, new leadership; but 157 million Nigerians, who can make this happen, are not ready; and people continue to die, pollution continues unabated in the creeks, poverty deepens, insecurity expands, influence and representation is woeful and hopelessness and depression are the nation’s hallmarks.

Reading a letter the Sheikh of Borno wrote to Sultan Mohammed Bello of Sokoto in 1824, in which Sheikh El-Amin El–Kanemi expressed his country’s desire of the Sultan of Sokoto’s country, I had an epiphany. Like the Emirates United, would we not be better-off as united nations than this clumsy, crippled monster? See: NewsRescue–Letter From Sheikh Of Borno To Sultan Mohammed Bello: Message To All Nigerians

We are not patriotic. Our civilians do not care about the country and under such conditions; it is pricking that our soldiers and police, the only true patriotic Nigerians by virtue of their profession, should continue to make the ultimate sacrifice, dying while combating deadly ills in the creeks and in the deserts. I am being honest here; it is my pledge to Nigeria. I will not fight for Nigeria in Nigeria. I will not die in Borno or in the Niger Delta creeks or at the hands of Ombatse to clear up the continued spillage of the recklessness and callousness of our derelict civilian regime and ethno-combatant, intolerant masses.

Those of us who strongly advocated a SoE and full military combat to squash Boko Haram, did not anticipate this… that military engagement will not be properly financed and not accompanied by rounding up of the political sponsors. Something does not add up when the ex-governor of the state who is strongly implicated in the evolution of this menace, sleeps in peace and even purchases the ‘most expensive jet in the nation;’ when indigenous and central politicians responsible live in splendor, while youth from around the nation die in combat. May God bless our soldiers and the Civilian JTF who honestly deserve better than dying for internal, civilian government and politician caused wars and deplorable states of security.

Under different circumstances, had we had real leaders for long in our history, that built the nation and not only robbed it, and who cared about the people and did not hate us, things could have turned out pretty different. We would have truly loved Nigeria. Like Ghana where they all wear the nation’s cloth, have a kente-laced parliament and fly Ghanaian flags. In Nigeria, our flag is money, dollars, not even naira; our presidential podium is laced with dollars and we wear True-religions, Thomas Pink and Polo only.

Goodluck can perhaps better find his level and be appreciated as a leader in Ijaw land. Security challenges can be best managed by domains for their domains. The battle with Boko Haram can best be managed by involvement of the El-Kanemi emirate. The kidnapping in the South can best be managed by their state traditional-political led initiatives. Complicating the management by referring to a center causes suspicion, accusations, desertion and failure. Traditional leadership should either be scrapped or merged back into regional governments. Those who occupy traditional leader seats need have a real role in the progress, safety and security of their regions. They are the first line to the community.

The British colonialist as much as we want to hate them, kept us as three geopolitical regions—Western, Eastern and Northern. Though we could and should have had more, this was manageable and preferable. Unfortunately, ‘hyper-patriotic’ Ironsi, who did not understand the complexities of the problems and saw the wrong solution to a transient problem, dissolved this confederation. It’s the same way our overzealous, rather myopic and careless founding leaders, during Obasanjo’s military regime, copied the American presidential system, not appreciating the superiority of parliamentary leadership, which India, the nation which tops Nigeria in multi-ethnicity utilizes to maintain peace while ensuring successive stable leadership.

Ironsi on 24 May 1966; released Decree No. 34. Excerpt: “The provisions of the Decree are intended to remove the last vestiges of the intense regionalism of the recent past, and to produce that cohesion in the governmental structure which is so necessary in achieving, and maintaining the paramount objective of the National Military government, and indeed of every true Nigerian, namely, national unity. The highlights of this Decree are as follows: The former regions are abolished, and Nigeria grouped into a number of territorial areas called provinces. . . . Nigeria ceases to be what has been described as a federation. It now becomes simply the Republic of Nigeria.” 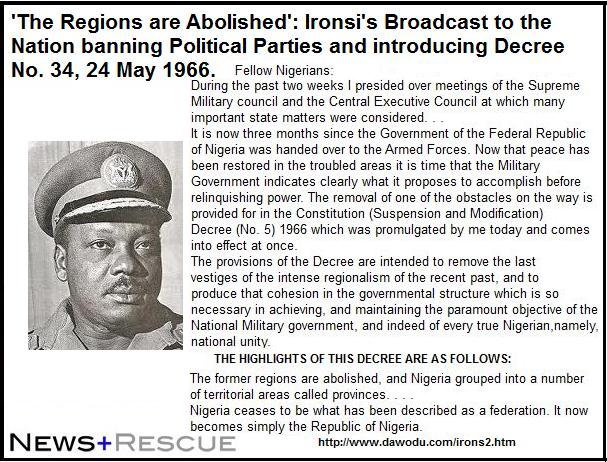 Gowon’s Decree No. 8 of 1967 which effectively restored Nigeria as a confederacy fulfilled much of what is preferable. This decree as some opine, provided 95% of the Aburi accord’s demands.  It stated, “…legislative and executive powers of the Regions have been fully restored and vested in their respective Military Governors. But the provisions of section 86 of the Constitution of the Federation ensure that no Region shall exercise its executive authority so as to impede or prejudice the exercise of the executive authority of the Federation or to endanger the continuance of federal government in Nigeria.” But Ojukwu fought, Gowon created states and the rest is history.

It is extremely sensible we return to being a confederacy of 6 or more pieces. Ms. Ndidi Uwechue [ENDS] from UK suggested toward our Conference that “Nigeria remain one country but administered in 6 Zones, like Switzerland with its 3 distinct areas of German, French, Italian. Abuja to remain the FCT and not part of any Zone. And to scrap the Senate: It is too costly and we need only one Legislative House i.e. House of Reps. In 2012 Senegal got rid of its Senate because of the expense and it’s doing better for it.”

The fear of disintegration is the root of poverty. The average northerner on the streets gains absolutely nothing from the oil of the south and stands to lose virtually nothing if the nation disintegrates. You cannot get more poor than poor. Nigeria’s north, which tops the nations poverty chart (in the 80%s, compared to the South with levels under 20% poor in states like Anambra) is double digits poorer than neighboring Chad (58%) and Mali (50%). Frequently referenced Nigeria averages; poverty level in the 50% range conceals the true picture of suffering of the northern masses, as it also does those in the rural areas where poverty is concentrated. Regions will open much opportunity for the commoner where there has been none. The selfish and insensitive cabals don’t want this.

More on the merits of regions, let’s take a case study of the economic terrorist Pirates in the creeks, or Boko Haram. When there is terror, the state governors fold their arms and blame the center. When the army goes out to capture and kill, the state governors accuse the center of crimes against humanity. We clamour for state police, but we need more than this. We need state or regional controlled army. This is the candid truth; else we will continue to have dangerous kidnapping, piracy and radical terror with a center unable to hold. Had we had real leadership, we could address and resolve all these issues, but as sensible leadership at the center continues to elude us, in the interest of the safety and sanctity of life and in the love of Nigeria—the people and not the sand—it is time we consider other alternatives.

There are 112 million poor Nigerians and of these, 100 million are destitute—living under $1.25 a day. Is this where we wish to be? This does not make any sense. Those who are scared of and staunchly against us sitting to talk seriously about disintegrating into several smaller, more manageable nations are the wealthy cabal, not the millions of dying, distraught poor. The 3000 cabal swallow up 90% of the nation’s endowment and as such, fight to maintain an indivisible nation. ‘Coincidentally’ the cabal never die from terror as the masses and good, brave soldiers do. Unlike us, they are united and they are insulated from our woes. A question Nigerians in areas most interested in a true, no limit SNC should be challenged by is why their elected governors and senators, who represent them, do not advocate in their interest. We have to blame ourselves for our failures since it is we who elect our representatives; we should press for our desires through our reps and make less global, ‘fruitless’ noise.

If our ‘democratic’ leaders know what is right for us, they will go ahead and reverse the major errors of our military years, during which most players were rather young and inexperienced boys. We should strongly consider reversing the transfer to Presidential system error of General Obasanjo and the dissolution of regions error of Ironsi and Gowon.

For those of us who hoped that with ‘democracy,’ we could recover and be able to continue to keep our pledge to serve Nigeria with all our strength, defend her unity and uphold her honour and glory; the 6th republic whose loyalty is only to $$$, has so ethnicized the polity; and looting hungrily daily with their co-conspirator private sector cabal, have denied the nation any left honour and glory to be upheld.