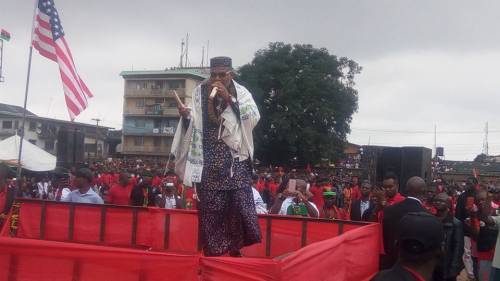 “Tell Buhari that I’m in Aba and any person who comes to arrest Nnamdi Kanu in Biafra land will die here. I’ll never go on exile I assure you.” -Nnamdi Kanu #Biafra

Nnamdi Kanu, leader of the Indigenous People of Biafra (IPOB) on Sunday, August 27, said that anyone who tries to rearrest him will not leave Biafra land alive. The IPOB is until now a peaceful group based in South East Nigeria calling for Referendum to leave Nigeria. The group started unnoticed but President Buhari sent the Army and they brutally slaughtered more than 200 IPOB activists and dumped their dead bodies in mass graves. These senseless killings by the Buhari army increase the popularity of IPOB among Igbo-speaking tribe of the South East and it leader, Nnamdi Kanu.

Nnamdi Kanu made mentioned of those killings in his recent speech when he said: “They shot and killed us in other places in Biafra land when they were protesting for my release. As our people rest in the grave, we’ll never rest until Biafra is restored.” President Buhari’s only “achievements” in his more than two years in power is mass-murder of 1000s innocent Nigerians and numerous mass graves dug by agents of the bloodthirsty tyrant for the 1000s innocent Nigerians he brutally slaughtered.

President Buhari out of wickedness is today holding Sheikh Zakzaky and his wife in illegal detention incommunicado for more than 18 months despite an order by a competent court for their release. Despite all the extreme savagery and monumental barbarism by President Buhari and his murderous gang, Sheikh Zakzaky sued for peace and asked his dehumanized followers to go to court and seek redress.

The semi-illetrate President Buhari thought all Nigerians will tolerate his murderous savagery and inhuman massacres like Sheikh Zakzaky and millions of his followers. With the above-quoted words of the leader of IPOB, Nnamdi Kanu, an armed conflict is on the pipeline in South East Nigeria.

A heterogeneous society like Nigeria do not need a murderous Wahhabi savage like Buhari as leader. Nigeria need a leader that will embrace all Nigerians and be fair and just to all not a notorious murderous criminal and wicked mass murderer like Buhari. I totally reject the brutal slaughter of peaceful IPOB activists by Buhari and his murderous gang and I totally condemned the hate speeches of IPOB and Nnamdi Kanu. Hate speeches always lead to murderous terrorism and genocide. Rwandan genocide started with hate speeches.

Nigerians should not expect anything good from a notorious mass murderer like Buhari. Due to his cluelessness he plunged the Nigerian economy in to deep recession and blamed past regimes. Buhari recently approved a railroad project to his village, Daura, from the commercial city of Kano. If I may ask what is the economic benefit for Nigeria of the railroad to Daura? Nigeria took huge loan from China to finance the railroad projects.

On a final note, Nnamdi Kanu displayed American and Israeli flags at his rallies. The American government and the Israeli regime compelled Buhari to release Nnamdi Kanu from detention despite his secessionist activities. Nnamdi Kanu and IPOB should beware of the evil machinations of the racist Israeli regime in Africa. The Israeli regime want to repeat in Nigeria what they succeeded in Sudan. The question is how is South Sudan today? War, rape and destructions going on in South Sudan while murderous Israeli savages loot their resources.