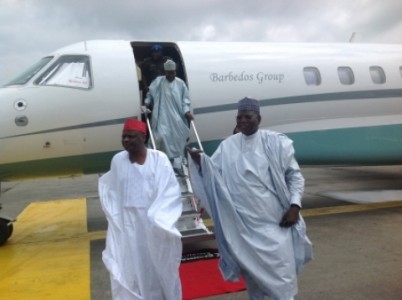 A team of Northern governors on a solidarity visit to Rivers State Governor, Rotimi Amaechi, have asked the Inspector General of Police to immediately redeploy the Commissioner of Police in the state, Joseph Mbu, over what they described as his unprofessionalism and political partisanship in the multiple crises rocking the state.

In a statement distributed to journalists shortly before they drove out of the Government House in the company of their host, the governors — Babangida Aliyu (Niger) Murtala Nyako (Adamawa), Sule Lamido (Jigawa) Rabiu Kwankwaso (Kano) —  said having interacted with stakeholders in the state, it was clear that  Commissioner Mbu was being used to persecute the Rivers State Governor.

“We wish to call on the Inspector General of Police to hearken to the voices of reason and immediately redeploy and discipline Commissioner Joseph Mbu,” the statement said. “His action smacks of unprofessionalism and political partisanship which is unbecoming of his office.”

Talking really tough, the governors threatened that they would reconsider their earlier commitment to contribute part of their federal allocations towards the funding of the police if the Rivers police boss was not removed and sanctioned.

“With the way the police is being used and abused, and with officers like Mbu in the bus, we do not see the need for state governments to fund an antagonistic police and may be forced to reconsider our position on the financial contribution of states towards the funding of the Nigerian police,” the governors said.

They also resuscitated the debate over the desirability of state police for the country, saying it had become a necessity since the federal government was now in the habit of using the federal police to persecute political enemies.

“Arising from the action of the police, and Joseph Mbu in Rivers State, the call for state police as a constitutional provision has become a necessity,” the statement added. “We note that the events in Rivers state have again brought to the fore the issue of true federalism and the need for institutions derived from the Constitutions to be allowed to function without undue interference. As federating units, we must be allowed the space to guarantee our people’s sustainable development as provided by the Constitution.”

The governors commended Mr. Amaechi for his “maturity and calm even in the face of apparent persecution”. Read more: http://premiumtimesng.com/news/141099-breaking-northern-governors-demand-removal-of-rivers-police-commissioner.html