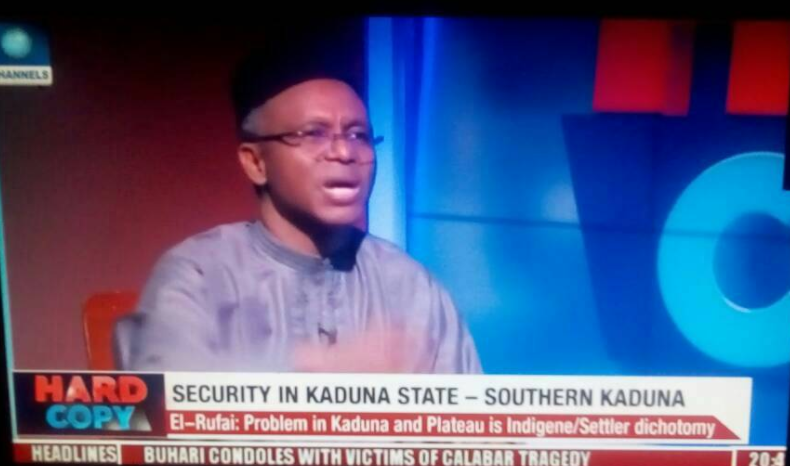 In 2007, Aliyu Magatakarda Wamako applied fanaticism and bigotry as a political mechanism to lure the minds of the easy go Sunni Muslims of Sokoto to his political advantage. There was a drama –like a scene involving Wamako and a crowd of zealots and bigots in the State during a particular campaign rallies when he aspired to succeed Alhaji Attahiru Bafara to the gubernatorial office of Sokoto State.

Wamako: (highly spirited) do you like these people? (he is referring to Shiites)

Crowd: (shout loudly) no we want them out of Sokoto!

Wamako: Ok, vote for me, I will deal with them for you. Will you vote for me?

When the Election Day came, these bigots and zealots turned en -masse and voted for Wamako into the gubernatorial office to kill some Shiites, destroy their legally acquired property worth millions of naira and sent others out of their state of origin.

In 2015, Nasir EL-Rufai, a man who knew nothing about the difference between Shia and Sunna, was given Shia identity by his PDP opponents in order to trigger the Sunni majority of the State to vote against him. As a northern politician who is madly politically over ambitious, El-Rufai rushed to the realization that the best, the easiest and the cheapest campaign strategy for him was to embark on fatal war against the Shiites minority of the Kaduna State.

Thus a few months after his election into the gubernatorial office of the State, El-Rufai advanced his usual deadly plots and this time around the victims are Shiites- not Umar Musa Yar’adua. He joined the combined forces of private individuals and authorities in the front line of hatred and war against Shiites minority of Nigeria. He single handedly completed the pogrom started by the Nigerian army in Zaria. In fact he went beyond Zaria to Kaduna where many Shiites were mercilessly killed by police and El-Rufai well trained murderous thugs. Property was destroyed, and subsequently he declared ban on Shia in the State through his hire purchase puppet, Samuel Aruwan.

The shallow minded and brain shattered Izala preachers were openly seen and heard celebrating El-Rufai’s job well done throughout Kaduna State and I quote one of their statements here, “ Mallam Nasiru Ahmad El-Rufai did for us in one Month what we could not do in 2oyears”.

Even as a Christian, Mr. Simon Lalong the governor of Plateau State saw a political reason for destroying Shiites’ school/centre and leaving them in a state of apprehensiveness and tension for at least one year now. It is important to note that Plateau like Kaduna, is a cosmopolitan State; the majority of the Muslims there, are inclined to the dangerous and fanatic Izala/Wahabbi/salafi ideology. Among them some had come from other northern States after committing shameful crimes against morality and chastity. Others among them came to the States out of the blue and settled there for life. Now, there are lots of indications that Mr. Lalong is desirous of votes from these dogmatist and money monger Izala people in his re-election bid. He may also be in desperate need of their votes against any Christian opponent in the new fashion “from governor to Senator” ambition.

A report from plateau State revealed that the Izala community vowed to always stand by governor Lalong in appreciation for crippling Shiites’ activities in the State.

Some Months ago, a group of pseudo-mullahs who call themselves Sheikhs met governor Abdullahi Umar Ganduje of Kano state in his office at government house and reported that they mobilised a huge amount of money and materials in humanitarian aids to internally displaced and victims of Boko Haram insurgency in northeastern States. According to them the aids were delivered to the victims, and were appreciated by both the victims and their state governments. They led the gullible governor to the conviction that the aids were delivered in the name of Kano State government under the leadership of what they called “khadimul Islam” (the servant of Islam), Abdullahi Umar Ganduje.

In return for the benevolent gesture, the Sheikhs demanded that khadimul Islam should ban all Shiites activities throughout the State. In reply, khadimul Islam assured them that they did not have to bother as he was aware of everything that was going on, and that his government could not tolerate people who were insulting the companions of the prophet of Islam. In order to prove to them his wicked plot, he revealed that he was the mastermind of the killing of the matching Shiites who embarked on 152.1 km symbolic trek to Zaria where they would observe the 40th day commemoration as a tribute to Imam Hussain who despite the scorching sun in the desert of Karbala, was barred from the available large body of water in River Euphrate for many days and finally murdered.

Back to Sokoto again where at a present Barrister Aminu Tambuwal is the governor. Bar. Aminu Tambuwal is respected by many Nigerians for being a civilized and educated politician. Alas! The same Tambuwal appeared to prove that he is not different from Wamako, El -Rufai, Ganduje, and Lalong.

Just on the 27th September, Tambuwal went on the air through one of the state lawyers and announced that the state had banned Shiites procession. Reports emanating from the State on 29th of September showed that the ban went beyond public procession to even an indoor gathering.

It now appears in the limelight, some northern governors are desperate and maniac; they became desperadoes about their fate in 2019 and subsequent years associated with senatorial ambitions. They therefore seem to seek popularity in killing Shiites of their states.

If you don’t understand, I mean to say Shia can never be crushed by whatever force. You may wish to keep trying history will repeat itself.